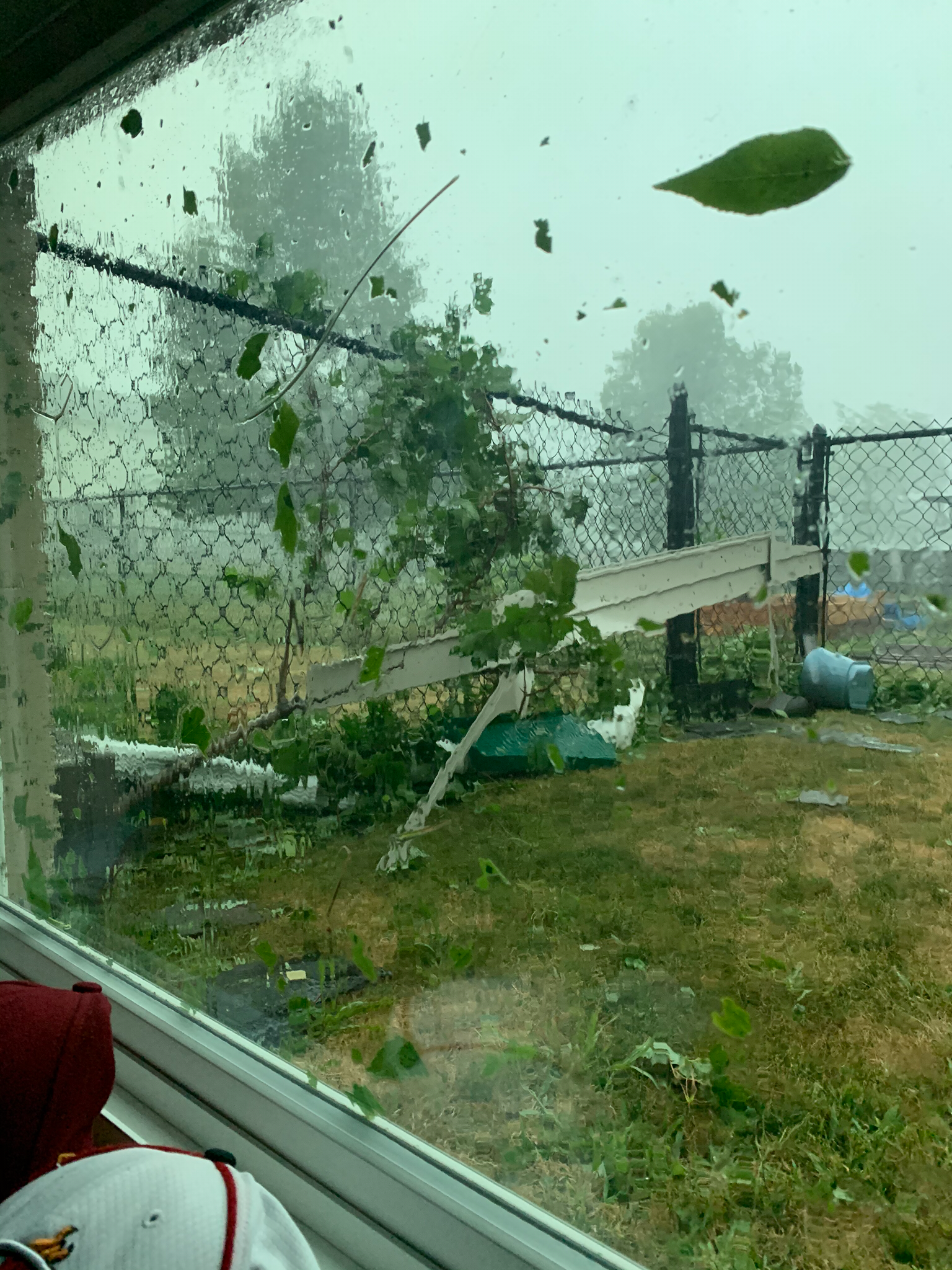 In this article and podcast I’m reflecting on disaster communications for marketers when natural disasters impact business operations. The Iowa Derecho 2020 impacted most everyone in Linn County, Iowa, being without power and internet impacts workflow and effectiveness.

The storm – I call it similar to an inland hurricane without warning – damaged about 90 percent of buildings in Marion, Iowa, the city where I live and impacted us for days. As of this writing I’m still without internet and am running off my Verizon Hotspot, which is slow but better than nothing. Thanks Verizon for waving overage fees.

This video of my backyard gives you an idea of the storm as well:

That is a storm coming through.

I’m a planner – but typically that aligns to content strategy and digital marketing planning activities. What is easy to forget is how do you respond when a disaster hits. Do we even have a disaster communications plan? Also let me say my heart goes out to everyone who lost their homes or suffered way more serious damage and impact than I have felt.

Once my property was somewhat cleaned up after the surprise storm, I tried to get back to work. That was harder than it sounded.

Had you asked me a month ago if I had a plan on how I would work without technology I would have said no. It would have seemed unbelievable to think I wouldn’t have technology or internet or at least a hotspot to work.

Tip 1 in disaster communications: Plan for the worst, hope for the best.

Why does disaster communications and planning matter?

Certainly, we’d love marketing and content to be automated but automation needs supervision. As Jennifer Radke and I discuss in this episode of the podcast: Sometimes you must push the “pause queue” button on your social media posts as well.

Usually we think of the pausing posts functionality in the sense that we don’t want to say anything that can be taken out of context with current situations happening. For example, if you have social posts going out that talk about being “homeless” in a sense that companies are now working remote due to COVID the people who are actually homeless from the storm might not feel too good about that message.

When a company is impacted by a natural disaster they can’t always however push the pause button. Or update other scheduled or automated marketing messages. Or turn off an ad campaign to a down website.

We certainly can make a plan for different scenarios and maybe it would be helpful, but where do you draw the line? The scenarios could be endless, but for marketers and content teams (aside from personal impact) it really all comes back to connectivity. Can you connect to the systems that you need to connect to?

Some systems are still not accessible via mobile and that can be a problem. Make sure that team members know how to quickly access the different systems through devices that they usually don’t use. For example, make sure they have passwords memorized or saved to secondary devices like iPads, iPhones, etc.

The power of distributed teams

While some disasters – think COVID – can impact everyone everywhere – most natural disasters are regional. For example, the Iowa derecho was in Eastern Iowa, the California wildfires are in California and so on. This is where distributed teams are helpful.

In a traditional office where everyone was in the same place, the power would go out and everyone would be impacted right then. When you have team members in different locations tasks can be moved between areas. For example, when I worked with teams located in Baltimore, Minneapolis, Cedar Rapids and San Francisco, it was easy to move tasks between teams based on availability and time zones.

Certainly, if the power, internet and phone service is out in Cedar Rapids, they can’t call Baltimore, but Baltimore has a chance to jump in once they hear the news and colleagues in Cedar Rapids are not reachable.

This is another example of why routine stand ups of teams are necessary. Give updates on projects. Quick ones.  Other colleagues can only jump in when they know what is being worked on and what might be worth jumping in on.

Disaster communications tip 3: Use a project management tool so others can help.

Using tools like Basecamp, Jira or others also help teams understand what is in the hopper and needs to be addressed.

That leads me to this point. Some companies are strict with who can see or access what. That makes sense in some times, but can really slow down responses when a disaster hits. Somebody else can only update my Marketo campaign or my HubSpot cadence when they can actually access it.

Disaster communications tip 4: Have backups for all areas.

It’s also good to have a list of channels on how you can reach customers or prospects. For digital teams, that often includes:

That can present a problem when there’s no internet. If possible to turn quickly, you could send a quick mail campaign even. That strategy – like most – certainly depends on your type of business and the size of audience.

The Linn-Mar School District delayed school three weeks due to storm damage and was discussing how to reach 7,700 students. They ended up recording a compassionate message from the district superintendent. That message was then distributed via an automated phone system that called every registered phone number. The same message was also emailed out and posted on social media.

Tip 5 in disaster communications: Consider phone calls to get the message out.

In a disaster situation, I appreciated this and it got me the information I needed to know despite not having internet available.

There will be a good amount of thinking in the moment planning during disaster communications as well. That’s why it’s so important that processes – even in calmer days – have the least amount of friction possible.

Teams impacted by disasters will likely have to consider new options. Who even has internet? Are any restaurants even open? During derecho, the answer was no. Everything  was basically impacted.

For example, I drove 20-some minutes east of my office in an attempt to use WiFi at an unaffected gas station. Turns out I wasn’t the only one. The line to even get into the station was long and some people reported they waited hours and thought they might even run out of gas waiting.

The Gazette newspaper in Cedar Rapids didn’t miss publishing any print editions and plugged their computers directly into the printer server to keep the news rolling.

Don’t be a jerk and collaborate to move forward as a team and company while those affected can recover.

Can we plan for everything? Absolutely not. But there are ways and setups of teams that can help us be successful when something crazy happens. And 2020 certainly has been full of crazy things. I’d give 2020 a 1-star review so far.