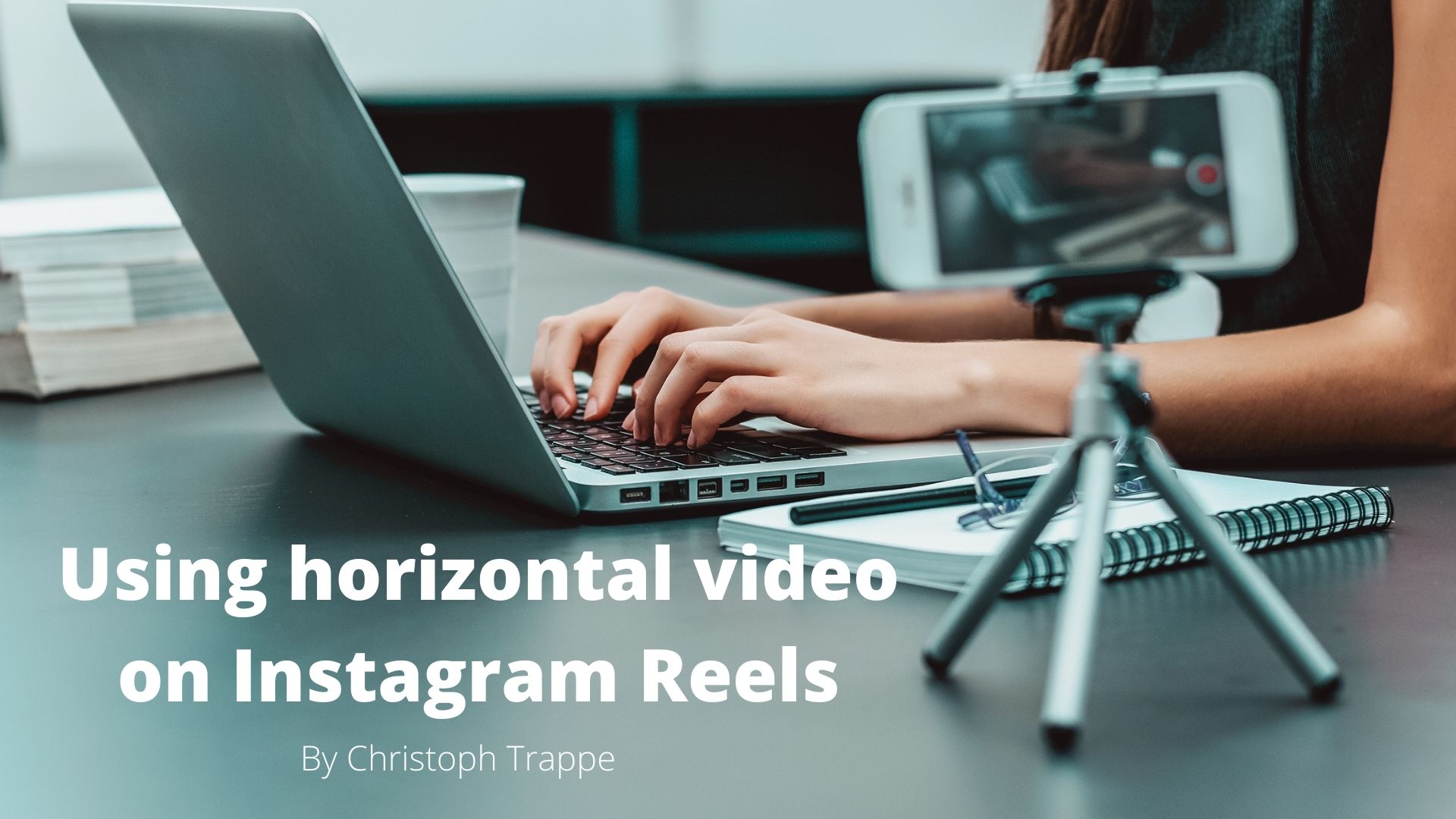 There has been a debate for many years now about which way to hold the phone vertically or horizontally when shooting video. I discuss that thinking a bit farther down in this article. But sometimes the best strategy is to know how to resize horizontal video for channels that favor vertical video. Those channels include Instagram Reels and Stories, to name a couple.

And horizontally shot videos like how I shoot them on my podcast livestreams don’t work on Instagram Reels or Stories at all. Just the middle of the video is shown so that wouldn’t work.

Why should we put our videos on Reels anyway?

Reels videos are just 15 seconds but they are new and Instagram seems to favor them as people are scrolling through their recommendations. For example, even my 15-second blurb form a 30-minute livestream had over 161 views already at the time of this writing, which was about 90 minutes after publishing of the video.

How to fit my horizontal video onto Instagram Reels and Stories

As you can see above the livestreams are split screen shot horizontally. In IG Reels it just zooms into the middle and just shows the podcast logo. That isn’t that great of course. So here’s how I simply from my iPad edited the video.

I picked a 15-second clip and imported it into my Canva.com account. From there I created a new design using the video template.

On my first try, I fit the video (upload through the uploads area) to the templated area. If the video is fit to the video template it looks like this once you try to resize it for Instagram Stories – the template also works for Reels.

That doesn’t work as well either, but it’s an option to crop to just a third of the screen.

Instead of fitting the video to the size, just put it somewhere in the middle.

When it opens in the IG Stories template, the video stays somewhat centered.

You can now make it bigger from there as this entire screen will be shown on Instagram. You can even fit it bigger across.

From there I added some background and downloaded the video file, which I could then upload to Instagram.

You can also add additional text or images.

It now works on Instagram Reels and Stories if you want to use it there.

Read next: How long can my IGTV video be? And how to publish podcasts on IGTV

Instagram is a bit of the outlier when it comes to the big networks on sizing. YouTube now even displays different videos based on how they were uploaded. So a square video can still fill the screen. The next session was previously written and updated in October 2020 and is still a good reminder on shooting video with your iPhone.

Which way to hold the phone for videos

I’ve you’ve been to any of my workshops, conference talks or have worked with me on projects that included video you’ve heard me say:

Hold the phone sideways like this to shoot video:

That was a common rallying cry by many content creators – mostly because people watched videos on their PCs and horizontal did indeed often look better.

Of course designing experiences for all devices is a challenge. I’ve shared the challenge infographics often have, Responsive design of course is one way websites are adjusting themselves for different-sized devices. But it still happens that creating for all devices can be hard.

Getting content to work perfectly on ALL devices can be a challenge. Ideas from @ctrappe …

. @ctrappe explains how we do NOT always need to hold the phone sideways for video shooting….

I’ve said the sideways thing often and for several years. And then I ran across this video from Buildings.com, one of the brands I worked with at Stamats Business Media:

I was reading the article and was about to watch the video on my iPhone  and of course I was holding it vertically – like many. I noticed the bars on the video and remembered how easy it is to forget holding the phone sideways. And then I clicked PLAY!

See what happens on the phone is that the video goes to full screen, which is currently vertical, just like the way the video was being shot! Perfect for me watching on a phone.

So what’s the right way to shoot video then? Horizontally or vertically?

I thought I knew the answer to that question, but like most things in digital marketing this is not a black or white answer. It all depends. I thought the experience of watching the Buildings video on my phone was great. Perfect! Much better than having to flip the phone to watch horizontally.

Would I feel the same on my laptop? I did actually go and watch this on my laptop and it’s fine. It doesn’t fit the screen, but I can watch it. Horizontal would have been better for laptop but the vertical angle was great for phones.

One answer down the road might be to have different versions. We could call that responsive video playback. It will be run as horizontal on laptops and vertical on phones. Of course, there’s a production issue to actually have two versions available.

For now, the right answer might be where the majority of your audience is: For example, over 60 percent of visitors to this site come from mobile devices so it’s likely okay for me to shoot vertical video on here. Especially when I upload it natively through the WordPress back-end.

How content should be displayed is a moving target, says @ctrappe. Video ideas:

Of course, shooting any video is better than not trying it at all. Please consider that. And these use cases are slightly different. Some horizontal video can be watched on a vertical device but it’s just smaller. It kind of looks like the resizing I did in Canva. But horizontal videos don’t get that treatment in Reels for now and this technique described above is one way to solve that problem.

Need help with your video storytelling strategy? Email me now!