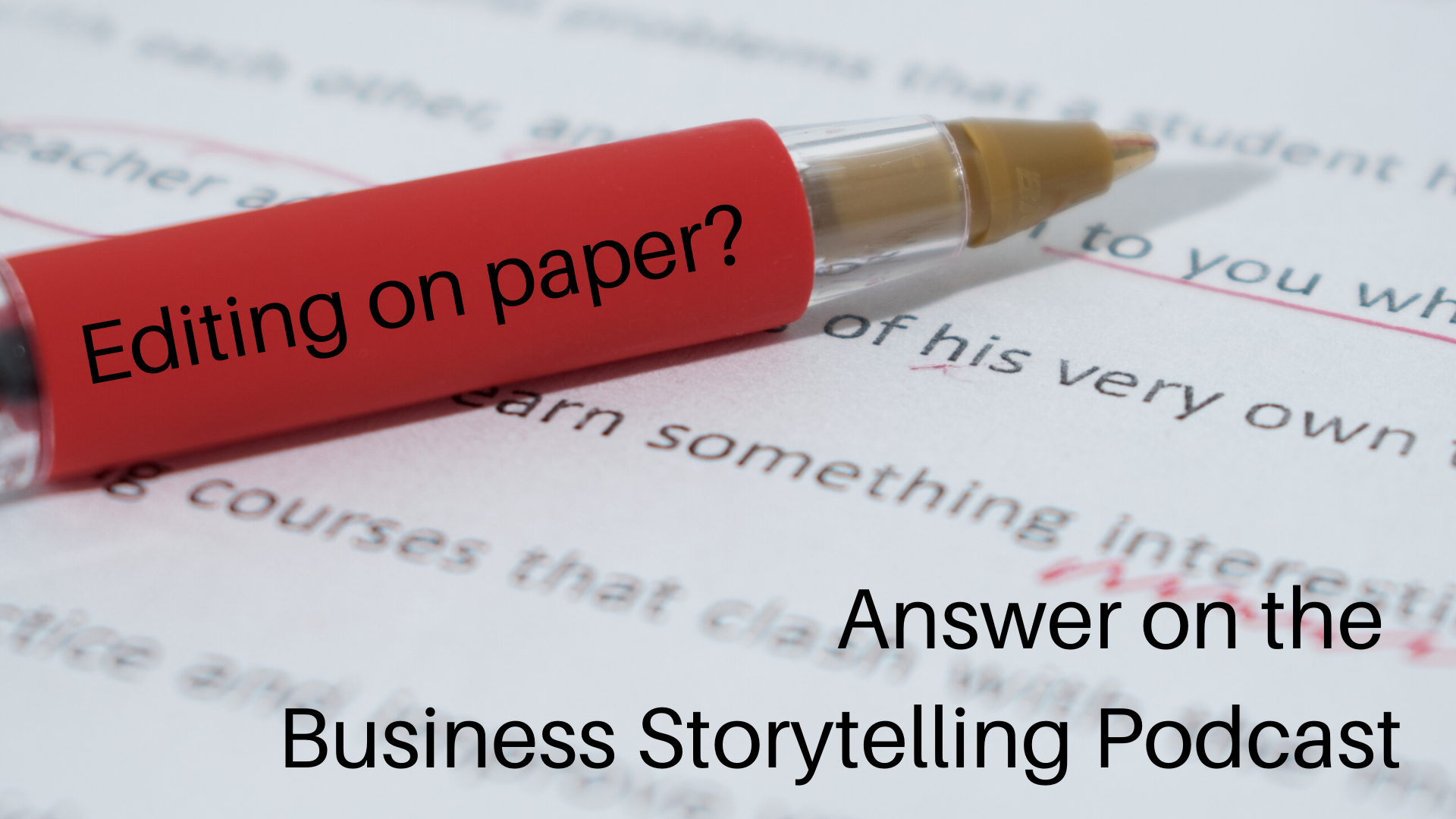 
Years ago I was producing training courses in the banking industry. I wrote on the computer and then printed them out on paper and edited them with a pen. Other on-site editors who reviewed my courses did the same thing and returned marked up paper copies to me. A compliance team that was not on-site would edit on the computer and use tracked changes.

Listen to my podcast on the topic on Anchor here

The tracked changes model seems to be the most common model today with geographically dispersed teams and also in the spirit off effectiveness and efficiency. It’s virtually impractical to use paper editing when you work with teams around the country or maybe even around the globe.

Please don’t fax me your article to edit. #snark #parody

In the last decade or so I’ve definitely been leaning towards editing digitally only. Seemed to be the right thing to do. then I finished my third book – Content Performance Culture.

I ordered a printed proof and while I was at it took the opportunity to edit the book on paper.

I was pleasantly surprised and caught myself editing potentially way more than I thought I needed to after all the prior digital edits. Like anything in content marketing there are positives and negatives. Let’s break them down for editing on paper and editing digitally only.

Maybe there’s a healthy mix of editing on paper and digital-only.

Pros and cons: Editing on paper

Holding the book and editing on paper felt like a tangible project and product. It also felt like that I was catching some mistakes and necessary updates that I thought already would’ve been changed earlier.

A definite pro is that it feels like you’re editing. Yes, I know I’m a digital guy but I have to admit that it was an enjoyable experience. Did I catch more things on paper than I would on the computer? Hard to tell but I made more edits than I had anticipated at that stage.

The biggest disadvantage is that just because we made the edits on paper they didn’t automatically transfer to the version that actually needs the updates. So once I edited 220 pages I still had to go back through them and transfer the edits. This process can definitely insert omissions and errors.

I am definitely not a fan of manual processes and this was one of them that was truly a pain. On some pages I made simple edit marks that were easy to transfer but there was also a possibility of making a mistake. Yes, I marked to cut a specific word on the paper version but now I have to make sure that exact same word and not more or less would be cut from the digital manuscript.

A few years ago I interviewed a murder suspect and prosecutors subpoenaed my notes. I was baffled by that because my handwriting is terrible and very hard to read. So hard to read sometimes I can’t read it myself.

Not being able to read my notes also happened during the book edit at times. I was looking to transfer updates and at times didn’t even know what I wanted myself to update.

Related: Is it possible to create content without a desktop?

One thing to remember is that not everyone can use tracked changes. When I was using an iPad for everything tracked changes were not an option for me. They don’t work well on iPads.

Editing with tracked changes on can help writers learn.

Then we have the group of editors that doesn’t change content but chooses to leave comments. Comments sometimes work when an article needs work and has overarching problems.

Example: I edited an article that talked about the advantages of having a fat cat. I actually tried to edit it with tracked changes first but at the end of the day the content in the article was really just talking about how great it is to have a cat-whether the cat is fat or regular sized. Plus, the article didn’t address the health issues of an overweight cat.

In that scenario I shouldn’t even jump into the line edit but simply leave a comment or reply to the writer and outline my concerns and ask for a rewrite with those changes in mind.

Another problem that happens to mobile content creators like myself is when people send me tracked changes and I open the document on the iPad. They don’t even show up.

At the end of the day it comes back to preference and to the way that helps you create the most powerful content. For example, if mistakes keep slipping through when you edit only with tracked changes, consider editing on paper.

If you keep missing transferring updates from paper to the digital version everything on paper isn’t much of an improvement. Find a way to be more successful with the transfer or edit digitally only. Another option could be to read on paper and then make the changes on the screen at the same time.

Maybe at some point we will have smart paper that allows us to edit on paper and then the edits are directly transferred to the digital version – which will be used for the published version. Kind of like this concept:

For now, consider the advantages and disadvantages and also your own strengths and preferences. Whatever can help you create the highest performing content in the most efficient way do that.

Finding ways to create high-performing content is personal and depends on strengths.