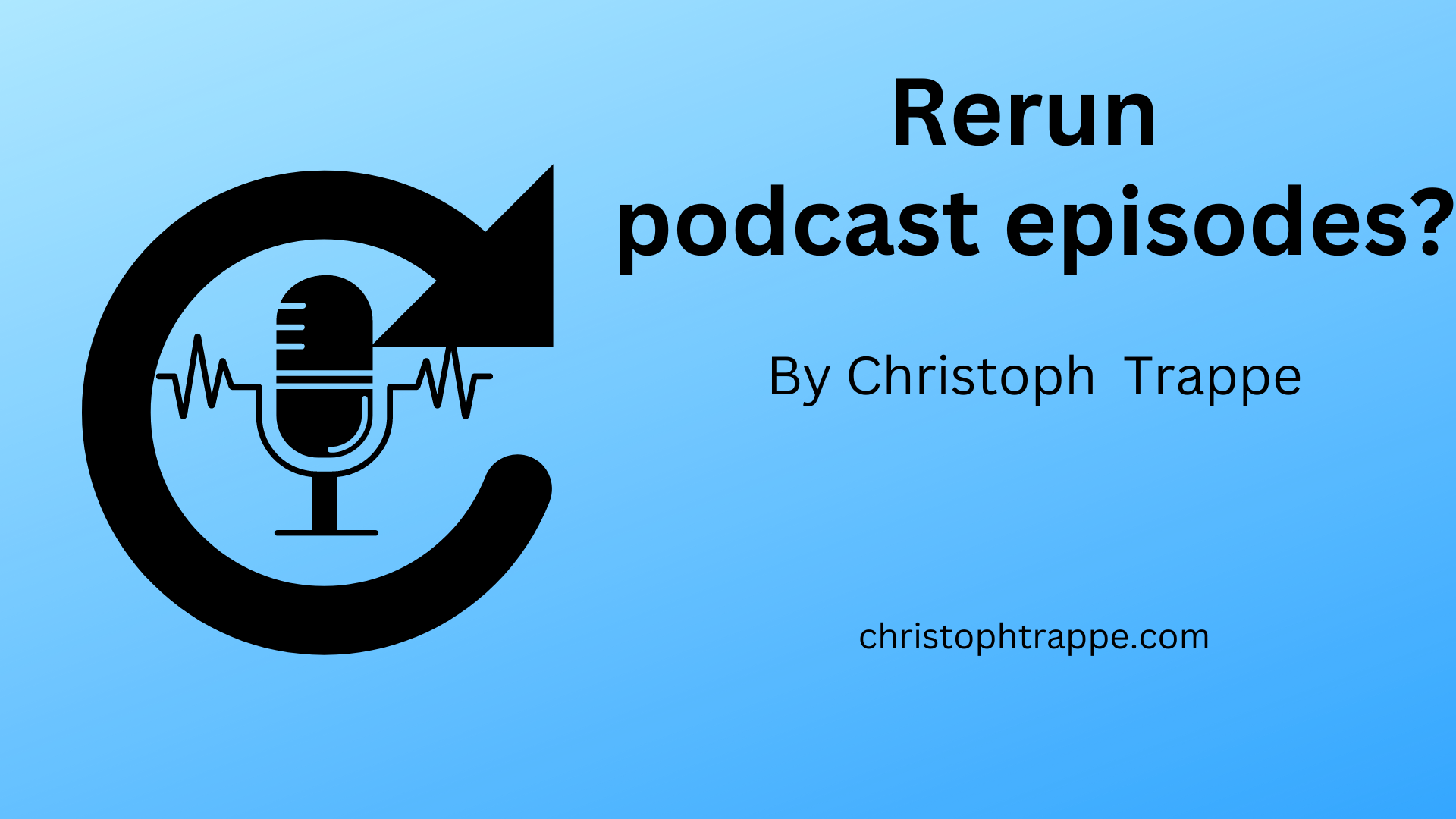 Some podcasts rerun podcast episodes, but is that a good idea? Does it work, or is it something we shouldn’t do? This article discusses what we should consider before rerunning old podcast episodes.

What does it mean to rerun podcast episodes?

You may have seen podcasts in your feed that rerun old episodes. Sometimes they edit them some, sometimes they add another section, or they may rerun them in the same way they ran the first time.

But basically, the practice of rerunning existing podcast episodes consists of taking an episode published a certain amount of time ago and republishing it like a new one.

What are the advantages and disadvantages of rerunning an old podcast episode?

The most significant advantage is that you can continuously share content with your podcast listeners. On that same token, I can’t say that it’s new and fresh content, however, because it is repurposed content that was already shown in that same feed a while back.

But suppose you have hundreds of episodes, and you’re repurposing Episode 10 as a new episode. In that case, very few listeners are likely to have heard that episode to begin with, and even if they did, they probably won’t remember it.

Podcasting also works when we make it a habit. And that means we have to publish episodes. Rerunning an old episode can help stay in front of people. But it’s not helping us build the habit of podcasting.

Read next: How to create a good podcast intro

As I was looking to repurpose old podcast episodes, the biggest challenge I ran across was that the style from the early episodes was just very different from my current style. They’re not produced as well; they’re not as professional, and sometimes the content isn’t close to the standard where it is today.

I’m happy to see that because it means my content has improved over the years. But that also makes me wonder whether or not I really want to take some of those early episodes and republish them to a much larger audience today.

Also, consider how your podcast is now distributed and how that’s different from earlier episodes. For example, my podcast used to be audio only, and then I started live streaming it, and then Spotify rolled out video podcasts.

Now, my video views on Spotify are relatively low compared to the audio listens. So I’m not super worried about running an audio-only episode in a feed with video episodes. If my video views were close to my audio listens, I might have a different opinion.

Read next: How to promote a page of a podcast on Instagram? Several tools that work!

Which old episodes are worth rerunning?

This, of course, is a great question, and it depends on your definition of what’s a good episode. The way I look at it in this scenario: I go back through old episodes and see which ones performed relatively well when they were published. Once I find one, I’ll give it a quick listen and see if I still like the style and content. I also take a look at whether it’s a unique topic.

For example, if I just published an episode about influencer marketing, it might not make much sense to rerun an episode on that same topic right after.

So I look at signs that they were good episodes when they were originally published and then make a decision from there.

Read next: How many podcast episodes should you launch with?

I use Anchor as my podcast hosting provider. So, to download an old episode, all I have to do is find that episode in my dashboard. From there I have to go into the episode and then simply download the file.

Then I have to re-upload it into Anchor to create a new episode. In this case, there’s just one file, so that would make it relatively easy. Some older episodes have multiple files because they have segments broken up by other content. I can download them one by one and then just have to make sure to upload them in the correct order.

At the end of the day, rerunning old podcast episodes might be a decent strategy if you have a lot of episodes and your earlier episodes, which likely have had fewer listeners, are worth re-sharing. But even if you try this, please continue publishing truly new episodes as well.