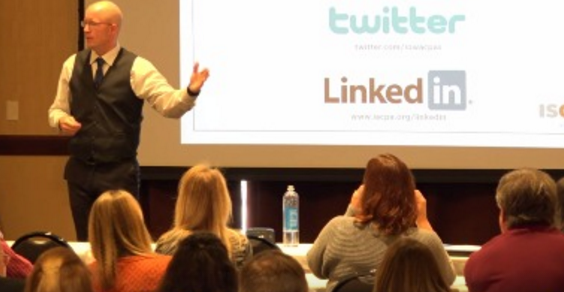 When I speak – especially at venues new to me – I always try to see the location where I will be speaking before speaking. Often that’s the night before or earlier that same day before the talk, when there are no attendees or organizers around. It helps me visualize what it looks like, where I might be standing, what’s the setup, and other things that I can tie into my talk even.

Maybe it’s from my days as a football player where visualization was important and helpful. Before games, I would have headphones in and visualize a great performance. How I’d block somebody, for example. How success feels on the field. Same concept applies here. This is the feeling of a successful talk. Let’s go and create that.

With speaking it’s no different. Even though I’ve basically abandoned PowerPoints, my presentations are well rehearsed. It’s kind of funny that I continue to feel the need to bring up PowerPoints, but really most everyone else uses them and it’s one of the questions I get asked the most: “Do we have your PowerPoint?”

“Oh, are you running it from your laptop? Let’s get that hooked up.”

PowerPoint is the status quo and good storytellers break it to stand out. It works. (And besides that, I’m not really a good PowerPoint designer anyway.)

I have an outline, general stories, and practice that. And then I adjust on the fly and add stories only relevant to that specific conference.

How to present without PowerPoints

Check out speaking page here and see if I might be a fit for your event, company meeting or conference

How to do a 2-hour workshop without PowerPoint

For example, at an October 2016 conference in Des Moines for CPAs I shared these stories/comments only relevant to them:

But besides those opportunistic stories, my talks are planned out and practiced. So, I like to finalize my practice by actually seeing the venue, visualizing how it’ll look and go. I always visualize things to go great, of course. I leave with no doubt that it will go great. I visualize it to go great. And most do. When I have a doubt, there’s usually a problem, so I stopped doing that.

I actually told them at the Des Moines conference how I could find 142 reasons to not want to speak publicly, because you know it’s actually kind of nerve-wrecking. Even though I do that maybe a hundred times or so a year, it’s still not that easy. But, I find reasons why I enjoy it, why it’s great, and why I should do it. No negative thoughts!

When I was publicly demoted

We have to know our values to live them

How I visualize speaking engagements

I typically don’t spend a lot of time at the venue, but just enough to see where people will likely be sitting, where I’ll stand and how the audience looks from there. I might spend a few minutes mentally going through my talk. But that’s basically it. It doesn’t take that long. In Des Moines, I did it while my kids were running laps around me and a hotel employee stepped in to ask if we were with the conference.

The whole thing might take minutes and sometimes seconds is enough. Before I’ve been at conferences and didn’t realize how big it actually would be, so that took a bit more visualizing and positive thought work. As I later learned, I couldn’t see the audience anyway, since the producers had the spotlights turned up so bright that I was squinting for an hour. “Anyone still there?” LOL. The producers didn’t take the hint. The lights stayed at the level they were at.

“Visualizing a great performance can actually empower us to make it great.” – @ctrappe

Visualization helps me be better and improve. And the better my talks, the more relevant they are for my audience. And that’s helpful to them and me. I’d recommend it!