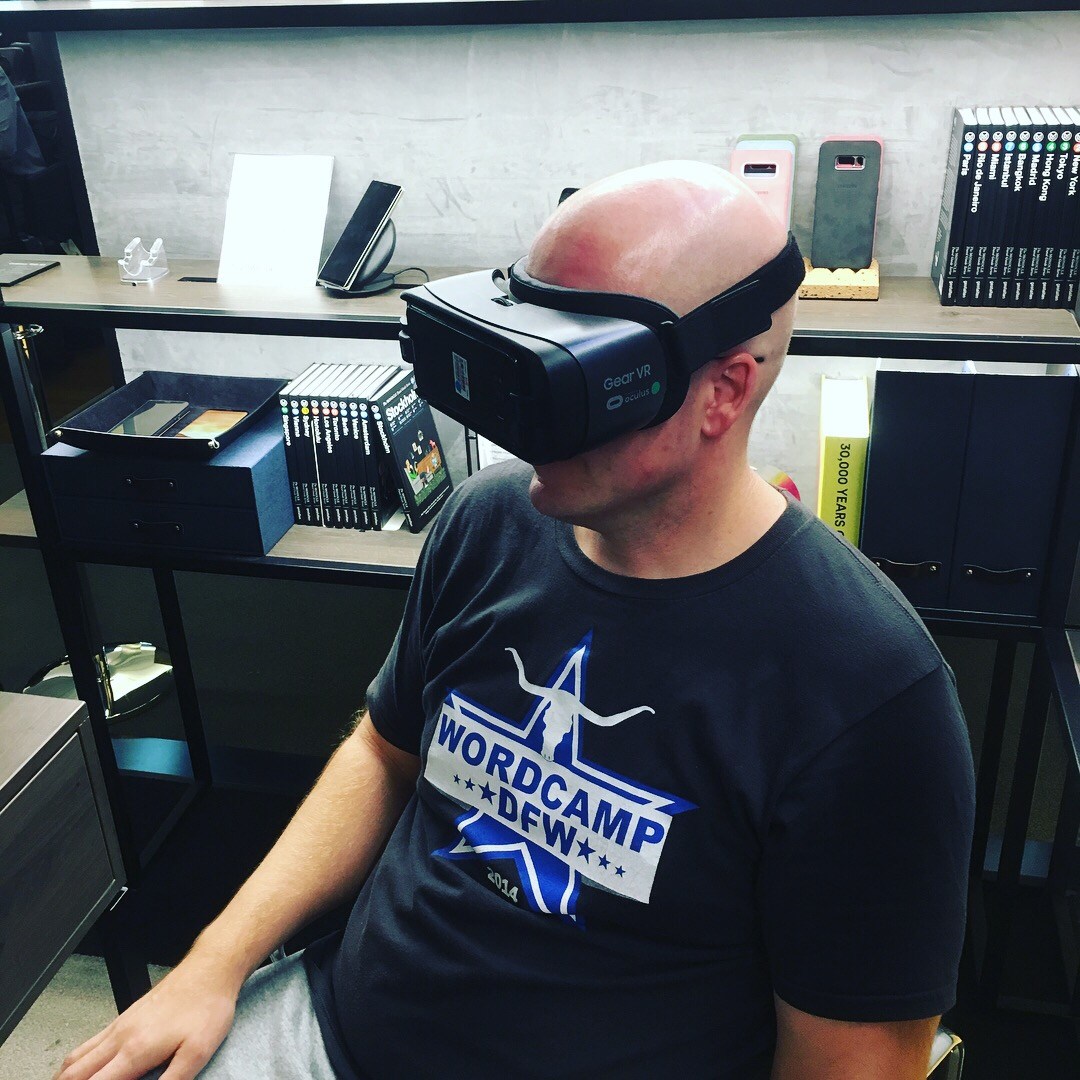 Virtual reality video and content consumption is still new for consumers and brands. Not everyone has a headset and even the people that do still need to look for videos worth watching and experiences worth consuming.

This article discusses how to consume VR content, find good content and dives into the overarching issues with VR content as well as how brands can tell VR stories now.

How to use a virtual reality headset

Headsets come at a range of prices and most work easily with your iPhone or other smartphone. You simply insert the phone into the headset and start the video.

To start a video once it’s loaded, you simply move “the mouse” on the screen by moving your head into the spot where you want the mouse. It takes some getting used to but it works.

How to find virtual reality videos to watch?

I discuss this at more length below, but the YouTube smartphone app seems to be the front runner here. Download that.

Of course, somebody has to produce the videos for people to watch. That’s where brands come in. Buy a camera – and they are in the hundreds of dollars today – and produce some videos.

The sky is the limit for creativity so to speak:

Brands can tell #virtualreality video stories of events that surround them.

My first experience with consuming VR

And while that was a bit of a jab it’s true. Virtual reality when done well can demand 100 percent of concurrent content consumption attention. Does that still exist today? Rarely for me – except maybe in a movie theater where they kick me out if they see my phone screen on.

While I consider myself somewhat of an early adopter, sometimes I ignore some new tech longer than a true early adopter would. That was the case with virtual reality.

I’ve seen the headsets including in the British Airways Lounge at London Heathrow. A few times even. I ignored them. I was busy watching airplanes or trying some beverages.

And then on a layover I ended up sitting right next to them so asked to get a demo. Here’s how that looked:

“The mouse is in your head. Look to what you want to watch and then click right.”

Yup, the mouse moves by my eyes and head moving.

They showed me a space craft story from the point of view of the astronaut. Kind of cool to look around, but something like that wouldn’t keep my undivided attention for longer than it did.

Was my carry-on still nearby?

Who was walking by?

Were they giving me looks?

What time is it?

Did I get any notifications on my phone?

LOL. You get the idea.

Apparently, the demo person told me, with the headset you can watch Netflix (which I watch), play games (which I don’t) and more and more shows are being added.

I like the concept but also quickly posted on Facebook that I don’t like how disconnected it makes you from things around you. You can still hear and I was slightly wondering why there were no headphones ?. Some headsets have built in headphones and you can also use your iPhone, which is the device that actually streams the footage anyway. I assume AirPods work too.

Either way, my initial criticism also might turn out to be the technology’s biggest strength. If we can get people to put the devices on and keep them on they will likely have marks on their faces. Joking, but I did wonder about that.

Anyway, all joking aside. If we can get people to keep them on and watch our content, we basically have their attention. You literally can’t look at anything else. No second or third screen thing with virtual reality! Currently.

Now when I watch a game on TV ? I quickly grab my phone and Twitter or whatever to pass the time during commercials. You can’t really do that with a virtual reality headset on.

Will people keep them on for commercials? Some probably.  I doubt that I would.

But if we – the content marketers and storytellers – can get people to put and keep the devices on their heads because we are sharing valuable content and stories that can be a real connector.

Of course it again comes back to creating content people actually want to consume!

We’ll see how it all evolves but my guess is most consumers won’t keep it on for an overabundance of ads. Maybe it’ll push us all to do even better storytelling.

Since it’s still a new channel there certainly is a chance for early entrance storytelling companies to set the pace and see what works.

How do you share a virtual reality headset? “Let me see, dad!”

VR guru and friend Cathy Hackl offered to send me my first basic VR headset. Along with her book on the topic.

The headset was a hit around the house to say the least. “Dad, can I see?”

YouTuber Sara Dietschy really has outdone herself shooting and publishing the video. And people are watching – almost 6 million as of this writing. Of course, hats off for even considering jumping out of a plane and then doing it.

This is one of the videos that I could barely watch because the girls wanted to see it and were super excited to see how realistic and amazing the footage was. I agree – from the few seconds I was allowed to watch.

YouTube allows you to actually watch all videos in virtual reality mode, even if they weren’t shot in VR. Really quickly, here’s how you do that. Once in the video click on the three buttons on the top right of the video and then that will bring up this menu at the bottom, where you can click to view it in virtual reality-in this case called Cardboard – which is the name of the Google headset.

So when done well virtual reality videos are fantastic and given there are so few out there it’s really a differentiator.

So far, I’m on track to be a huge fan of virtual reality video storytelling. But there are some disadvantages and downfalls:

But overall this should be a great tool for even better storytelling in the times to come.

How to stand out with VR video

Here are some tips on how to brands can stand out with virtual reality video especially now as they’re still few people producing them:

It also helps to find visual stories. People talking at a table probably isn’t the best example. Taking heavy construction equipment for a spin could work:

In the video above I used an Insta 360 camera and held it up with an invisible selfie stick.

It was quite bouncy but you can’t see the selfie stick. You can also barely tell that I was struggling holding the camera in one place. Overall, projects like that lend themselves to shoot VR video.

There probably will be more apps and videos using VR over the near future. The Google Street View app on iPhone is already in the game. You can view streets in VR:

Wouldn’t it be awesome if this view was in virtual reality and you could watch the game totally immersed through a virtual reality headset? Of course, I have no idea how difficult that would be to produce but from a consumer perspective it sounds amazing.

The camera attached to referees is another way in that direction.

How YouTube is improving the virtual reality/360 video experience

For all of my first shoots, I’ve been using an Insta360 Nano, which is currently available for $100 on Amazon.

Just those 3 alone have over thousands of views on YouTube. Not bad – as YouTube views are harder and harder to come by.

The active shooter training video even won the best immersive video award in 2019 in B2B publishing.

YouTube has really made the virtual reality/360 video production and distribution easier. That’s also true for just video distribution on its own. YouTube helps us be efficient with our videos.

Reflecting, I don’t think a speech is the best use of VR video, but trying is okay. I also talked about VR during the talk so referenced the camera at times. From that perspective, it was worth setting up.

Setting up your phone for a virtual reality shoot

The setup is quite easy and quick. I have a selfie stick tripod. Put the phone on that, attach the VR camera. Start shooting. Some cameras have remotes so you can walk away and start from afar.

Some scenes might also make good 360 photos. Remember to buy a memory card with as much space as possible.

YouTube has added the following alert on web browsers on mobile to encourage viewing.

It says: “360 degree video playback is not supported in this browser. Please use the YouTube app. Play in app.”

Remember the days when you went to a website and it said: “Click here for the full version or here for the mobile version.”

Today websites just serve you the site’s version best for your device!

Stop it: How mobile devices are no longer just for on the go

But back then that was how you optimized the experience for people. Today, websites that know what they are doing are at least responsive. Of course, VR video is a whole new beast for all these devices and forms of storytelling, I mean not even the debate of how to hold the phone for video shooting has been settled – in my opinion.

#virtualreality should be shot holding your phone vertically.

In my professional opinion this call to action on YouTube is great. It encourages people to grab the best user experience. And for now, watching YouTube videos in VR on the app versus on other sites is the best experience for consumers.

YouTube is not currently adding the label on videos embedded on other sites, but I think it might be a good idea for brands to add a link – just like we did in the early mobile website days.

Want to watch this video with your VR headset, click here to open the YouTube app and the video directly.

An idea. As content producers, I would encourage everyone to try 360 video when the story lends itself to this format.

I would also highly recommend a tripod – like this one: