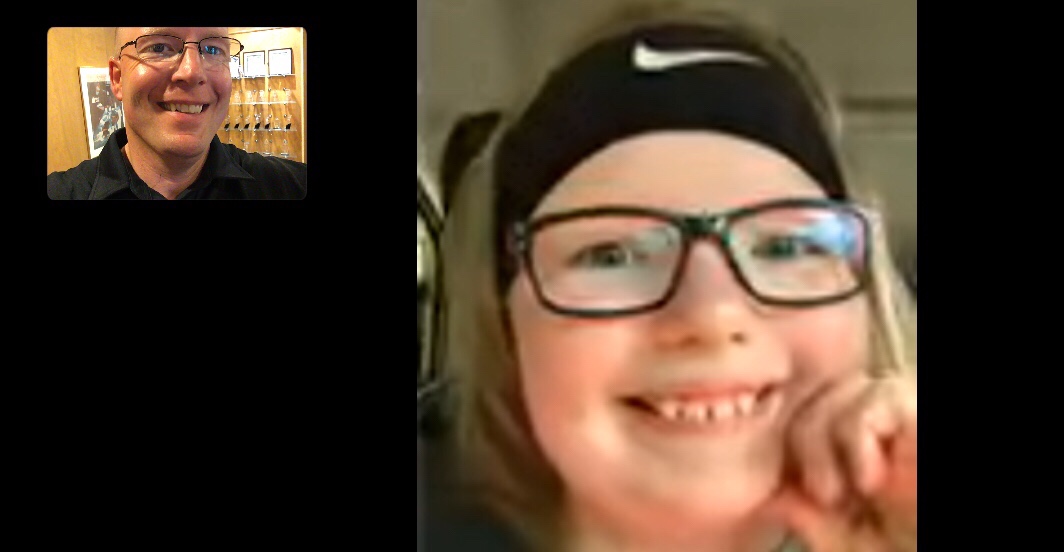 I do FaceTime chats with my daughters all the time when I’m traveling. When I was their age video phone calls were the stuff of science fiction. Today there’s multiple apps to use. Video phone calls are here for the masses.

My kids and wife actually kid me and tell me that every time I do a FaceTime with them while traveling I’m in my hotel bed. Blame me. The beds are comfy. That’s probably true but not everyone calls from the privacy of their hotel room.

Some people I’ve seen do FaceTimes publicly while standing in hallways at convention centers. Others do them on airplanes before the door closes. (Related Periscope) I have done a WhatsApp video chat while in the air and on airplane Wi-Fi before. The reception was pretty bad but it did go through.

The one I’ve seen in a hallway at a convention center was a dad about to ground a child via FaceTime. It’s kind of interesting because most people seem to empathize with this situation. “I’ve been there.”

There’s really no reason that person couldn’t have gone into a side hallway but another example of a public FaceTime.

Another example happened on an American Airlines flight as I was sitting in first class and the guy behind me FaceTimed his spouse or significant other.

She didn’t really want to talk to him so the entire conversation was him loudly apologizing to her for not wanting to do a FaceTime. I could hear it through my headphones despite playing music through them. Ugh.

FaceTime I feel like phone calls-in public can be annoying and we should consider following some simple etiquette.

The other thing is privacy. And sometimes people deliberately don’t care about that but I’ve sat next to or behind people on airplanes who were cutting big dollar deals over the phone and even named the companies they were talking about. What if I know the CEO there?

Another thing with FaceTime video is that the person you’re talking to might not realize that you are in a public place. For example, I’ve called my wife before without wearing a T-shirt. It was summer. I didn’t necessarily want other people to see me without a shirt on.

So I don’t necessarily need her to be showing my video to people around her.

FaceTime is a great invention certainly and I use it all the time. But let’s be understanding of other people’s expectation to not have to listen to other people yak on the phone.

Certainly there are ways to do FaceTime even in public without being too annoying. For example, I had another conference a woman was doing a FaceTime with children at home outside a reception. She had her AirPods in and was discreetly showing the area. I could barely tell that she was doing a FaceTime.

So if you choose to do public FaceTimes it is possible to do them without being annoying.