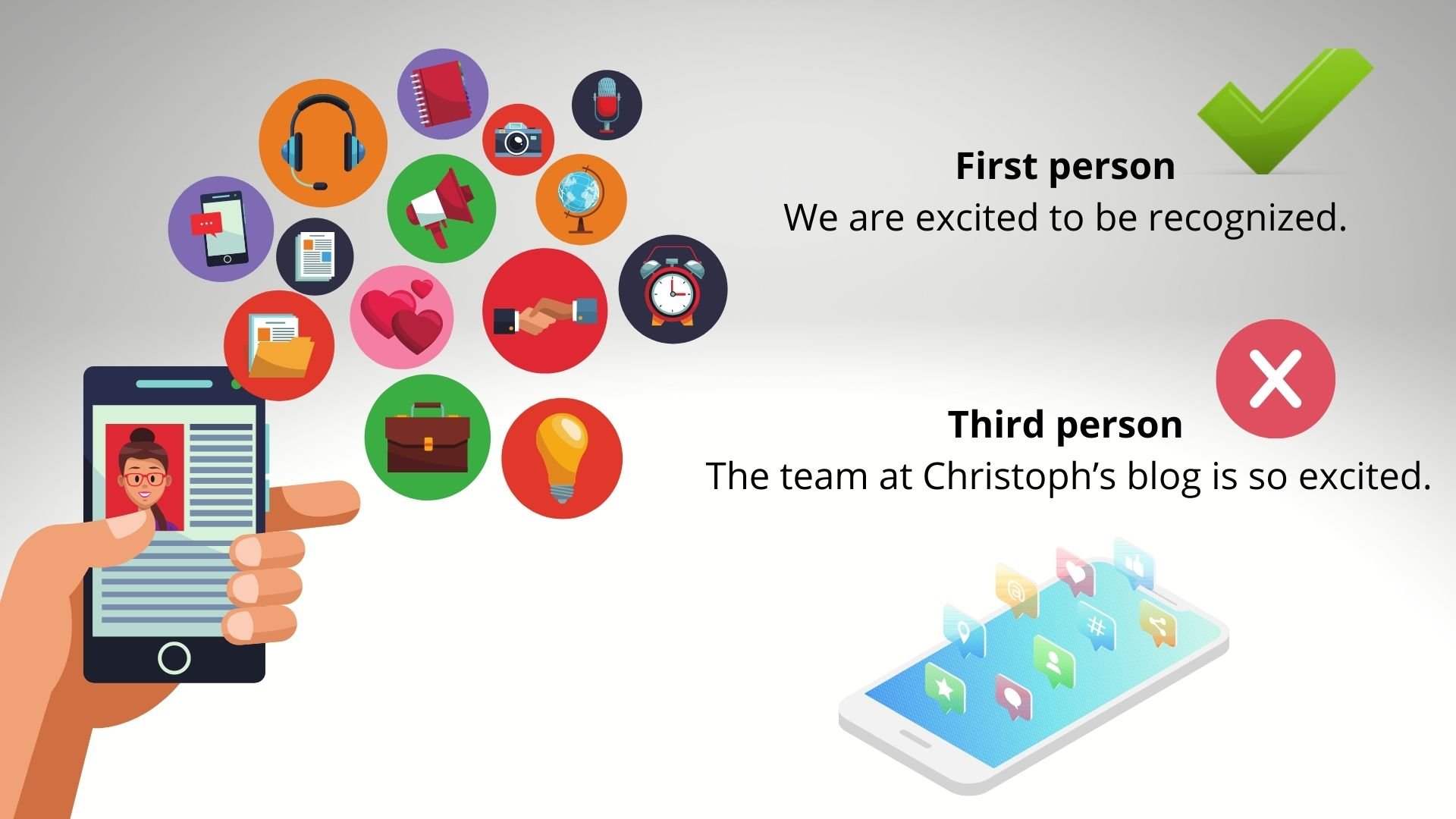 Unfortunately, we can forget that social media should be a personal and social communications tool. And when we are personal we talk in first person about ourselves and not in third person.

First person = We are excited to be recognized.

Third person = The team at Christoph’s blog is so excited.

Third person is way more distant when you’re talking about yourself. –  and that’s true whether you’re a person or a brand.

Yes, brands can be personal. So can people. But, sometimes we forget that…

I still see people and brands use the third person in their own posts. This might look like this:

. @ctrappe received an award today and will speak at such and such event. – (Posted by @ctrappe)

My guess is that this is a holdover from the “good ole'” days of news release writing. Organizations and people routinely referred to themselves in the third person. In a news release that wasn’t super terrible, because they weren’t necessarily supposed to be conversational or social.

I’m so excited to win this award and speak at that event. Hope to see you there. (Posted by @ctrappe)

I frequently compare social media to a dinner party and we certainly wouldn’t talk about ourselves in the third person at a dinner party or any conversation.

Read next: How to use social media polls to drive leads

I see that organizational accounts sometimes have to refer to others in the organization and that’s OK, but it’s a far cry from this news release-type third person language. An airline might say:

Please let a crew member on your flight know. (After hearing about an issue.)

Please DM us and we will forward your information to the appropriate department. (After getting a question that needs an answer from a subject matter expert.)

I grew up in a third-person world. News releases by us were quoting us like we were a third party. it’s probably OK for news releases to continue doing that since they have a different purpose but for social media it makes writing too formal in my opinion.

First person makes us appear human to our readers and it seems more conversational to me.

First-person writing doesn’t always mean it’s just opinion – though it could be at times. But it means you can add expertise and context.

Social media is called social for a reason. It’s supposed to be a conversation. Be personable, real and talk like humans would. It shouldn’t be that difficult since we all are humans.

“Talk like humans would. It shouldn’t be that difficult since we all are humans. ” – @ctrappe