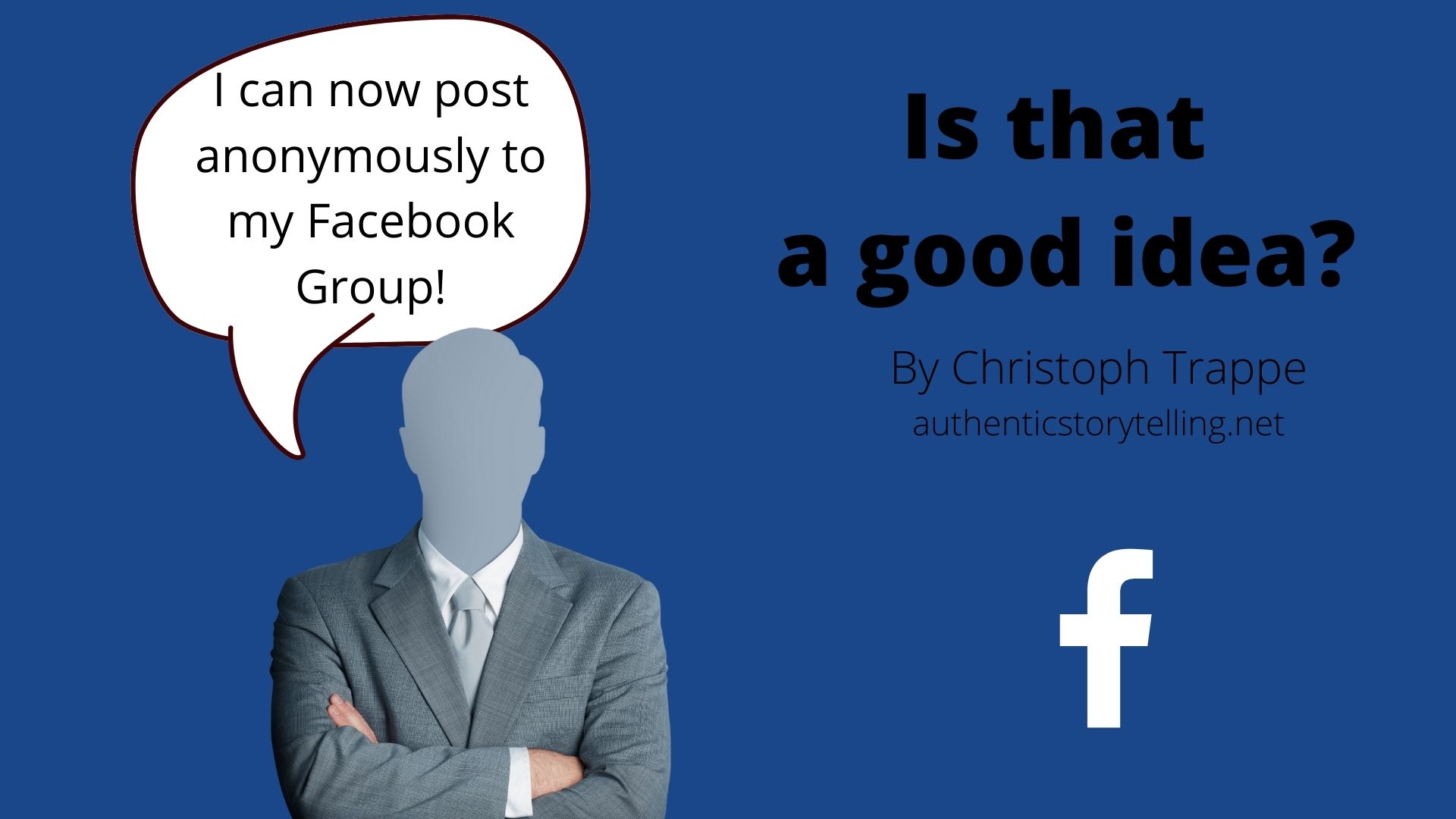 Anonymous posts in Facebook groups are now a thing! Fortunately or unfortunately – depending on your perspective. In theory, it can allow group members to discuss sensitive topics. In practice, we’ve seen what has happened on the internet when people can just say whatever they want when others don’t know it’s them. Though admins of Facebook groups still know who made an anonymous post so it’s not completely private.

Let’s dive into the topic some more here.

If anonymous posts are available in your Facebook group, here’s how that looks:

From there, Facebook tells you that the post will be send to admins for review and upon approval will be published to the group. The name is redacted from the post and shows as “Group Member.”

How to set-up anonymous posts in a Facebook group

As is often the case with new features, not all Facebook groups can do anonymous posts. This may also depend on the visibility of your group. I was able to turn on anonymous posts in groups that are set to private, but public groups didn’t allow it.

The easiest way to check if you can use this post type is by going to Group Settings.

From there, Facebook reminds you how anonymous posts work:

If you don’t have this function available, try setting your group to private. There’s a three-day waiting period before a group moves from public to private. Once it’s set to private it cannot be changed back to public.

Be aware that even private posts may not be truly private.

Like many things, it’s a personal choice by the admins of the group. What kind of topics might bear an anonymous posting? If there are many, you might just try it. If you do allow them though I would recommend to honor the commitment to anonymity.

Read next: Are LinkedIn and Facebook groups for business worth the effort?

For me as a Facebook user, it’s not true privacy – whatever is on the internet? And I have to have some trust in the group admins. What stops them from exposing me down the road one way or another?

I remember this example from a while back: In a local group, I reported a post to group admins. The group admin took a screen shot of his notification of my report and posted it in the group. Aside from whether the reported post should be reported or not, nothing stops a jerk admin from posting my name. The same can happen with anonymous posts.

Depending on the topic, you might also prefer to know who posted it. For example, when I was traveling a lot, I was in a bunch of travel groups. Sometimes I thought competitors to certain travel brands were just posting stuff to make a competitor look bad. That is hard enough to proof when you see the Facebook account’s name, but on an anonymous post overly negative experiences might be even more suspicious.

I mean, think about how some people at times react to anonymous sources in the mainstream media.

If anonymous posts will work in groups or not will be decided as more groups use them. As a group admin, I would consider testing it, but also keep the option open to turning them back off. As a group member, I probably would not post some highly sensitive topic that way.