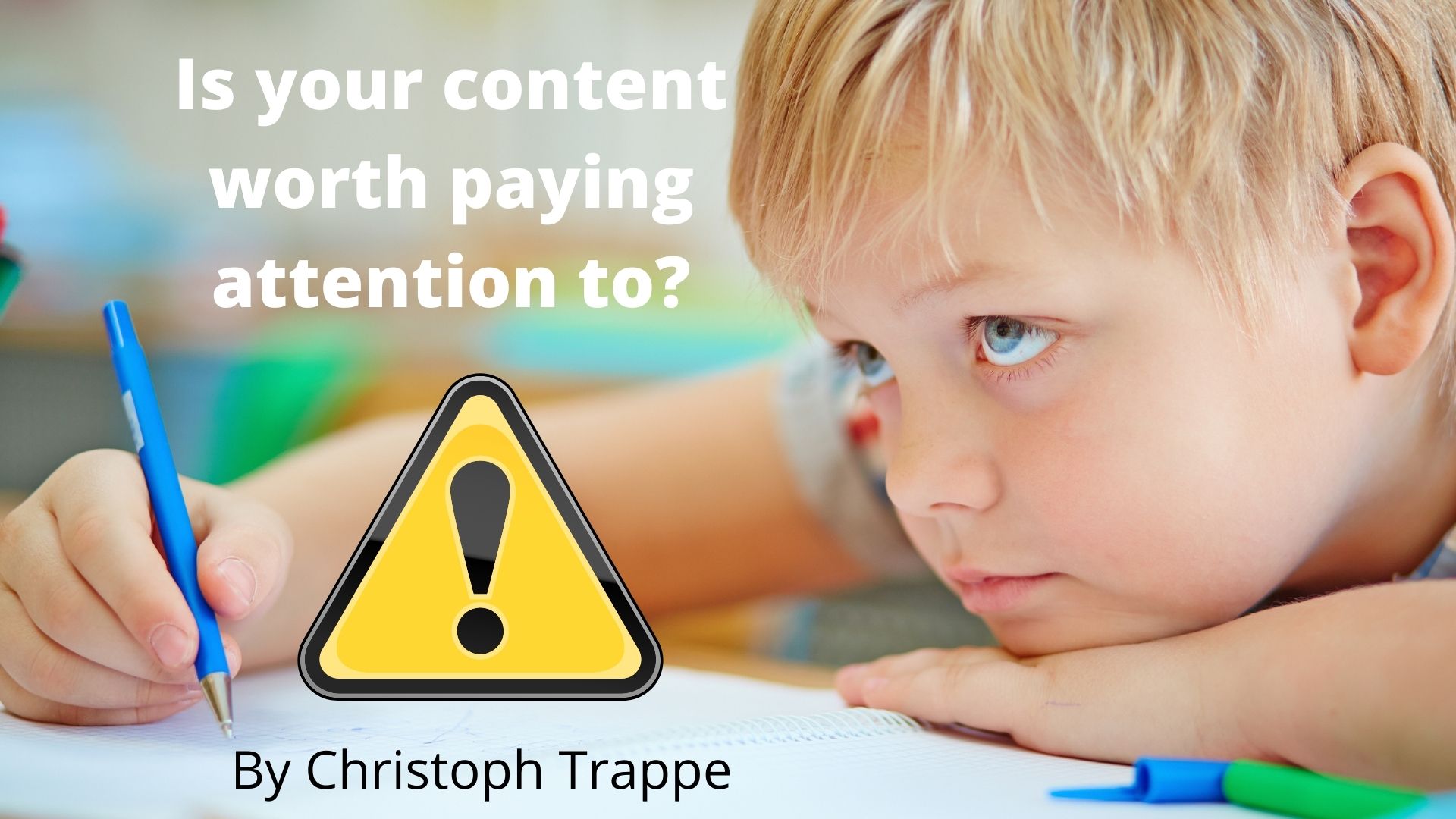 People’s attention span is short, apparently even shorter than a gold fish. Those are some of the headlines that we’ve been hit with over the years.

But what does that attention span mean to content marketers? Does it mean content should be short? Consumable in eight seconds total?

I don’t think so and this BBC article quotes experts saying that the attention span we give to different tasks varies. The attention span depends on how invested we are in whatever we are doing, how engaging it is and whether or not it’s worth giving attention to.

Really, we want our content to be binge-worthy, as Carlijn Postma put it. Our attention span isn’t suffering when we watch a Netflix show for eight hours straight. That’s because that content is interesting and engaging and speaks to us at that moment. But, of course not all Netflix shows are binge-worthy for every single consumer – just like not every brand speaks to every consumer.

I’ve seen Tweets that put me to sleep.  And they are short. So maybe it’s not about creating shorter content, but creating content that keeps consumers engaged.

Some books – even when they are  long – can be page turners. They keep our attention because the content is engaging, it’s interesting and it’s easy to read. Some articles online get read all the way through – or at least skimmed all the way through.

On the flip side, some books drag on, are verbose and are hiding facts in complex sentence structures. Some people might read them – I assume because they have to.

Sometimes that can be a new fact, something surprising or even a picture. During a livestream or podcast, it might be a change in the presenter’s tone of voice or a deliberate physical movement.

Either way, short attention spans don’t mean all stories need to be short. It means that we need to earn attention continuously.

“Give the story the length it needs to be told correctly.” – @ctrappe

How to actually get people to pay attention!

One way is to be unique. By way of example…

I flew WestJet- a Canadian-based airline, for the first time in 2018 and the flight attendant said the following:

“If we can get your undivided attention we would be shocked and amazed but would appreciate it. Just by her to calling out this reality in a fun way actually got me and maybe others to pay more attention.

Relevance and ease of consumption of the content certainly matter, but other factors are at play, too. Think of young children. They demand attention and often – at least when they are little – demand it through cuteness or another first:

We have a connection to our children and want to see what they are doing. Is your brand building relationships with consumers? Do you want to even? This is an important step to get people to pay attention. Have a relationship with them.

Read next: How to build relationships in the digital age … for business acceleration

When our children do something new we don’t want to miss it. Think of disappointed parents who were traveling and missed a first. Sharing something new can get people to pay attention.

Of course, whatever the new thing is it also must be relevant. Some new things don’t apply to us. On the other hand, some new product features can make our lives easier so we pay attention.

How does more lasting attention happen? That happens by sharing information that people actually want to consume, that helps them solve a problem or that educates.

Once attention is earned people remember stories, events and can even retell the story to others. Earned attention leads to advocacy, customers and more.

How to keep attention

Attention has to continuously be earned. That’s why I talk about the importance of getting on an ongoing:

Repetition matters, but whatever it is you are putting in front of me needs to be relevant. Sometimes that means we are reaching people on different channels.

“Calls to action should allow people to take the next step in their journey.” – @ctrappe

Easy breezy. Well, at least in theory. To keep people’s attention, we have to continuously present and share new and relevant information. Think about it this way: New stuff gets attention. So the ongoing presentation of new stuff keeps attention. That sounds easy in theory but is hard in practice.

Figure out where people pay attention

I record many shows on the DVR. Many of them I don’t find the time to watch – ever. Perhaps, the DVR playlist has replaced the stack of printed magazines I used to intend to read. I try to pay attention to all the shows, but there just isn’t enough time.

But I do play back some shows – sometimes moments after they are finished.

One day, I was watching the previous night’s showing of the “Tonight Show Starring Jimmy Fallon.”

I was kind of listening to the TV while checking Twitter and email on the iPad. That shouldn’t be a surprise to anyone as screen stacking or using a second screen isn’t that unusual anymore,

Jimmy Fallon did his little thank you bid on TV and the DVRed show ran through it. I caught a couple of the thank yous. Then a Tweet from the Huffington Post arrived and linked to this post, which showed the exact same clip I just ignored on TV.

I clicked and watched it on my iPad with undivided attention.

An audience’s division of attention is certainly something that we need to continue to consider. As we are sharing our stories, it’s important to pick as many of the relevant channels as possible to share our stories with our audiences.

It’s the only chance we have to be heard. Even if we do everything right a specific message might still not reach everyone possibly interested in the topic or message.

At the end of the day, getting and keeping people’s attention can be a challenge. A person’s attention span is only so long or have so much bandwidth. But creating good content that helps them solve some kind of problem can help us get there. And then of course make it available to them on all channels.

Read next: What’s the Create Once, Publish Everywhere (COPE) model?