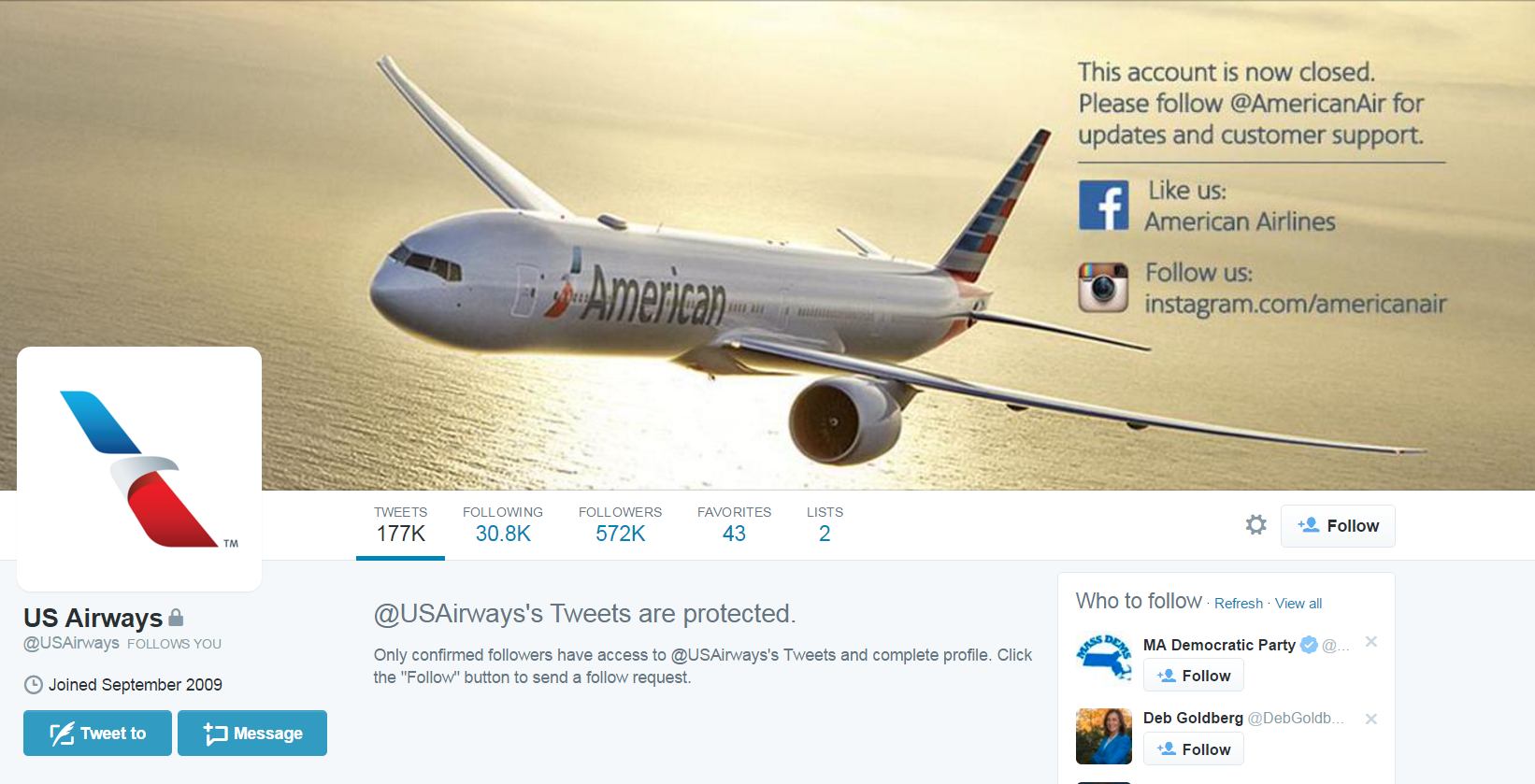 The merger of American Airlines with U.S. Airways reminded me of the difficult decisions that we can face when organizations merge.

What to do with social media accounts when organizations merge?

In this social media merger case, they simply set the U.S. Airways account to private so people couldn’t follow anymore. It’s probably a better solution than deleting it. Once it’s deleted somebody else could sign up for the handle. It’ll be interesting to see if they delete it at some point.

The biggest challenge would have been with migrating the U.S. Airways Twitter followers to the American Airlines account, mostly because there’s no easy way of doing it on Twitter. It’s virtually impossible.

On the other hand: For U.S. Airways email lists, frequent flyers, and those kind of lists, they are easy to transfer to American Airlines. They are all in a file owned by the organization. On Twitter (and other social media networks) you can’t actually export the follower list and move it to another account. It’s not an option. We don’t own those lists. The only option is to tell people that you are moving and hope they see it and follow the new account. That can be a challenge since social media networks move fast and messages are easily missed.

What American Airlines did here is probably one of the better ways to handle such a consolidation. Sure, hundreds of thousands of followers can be lost, but there’s really no easy solution here other than what they did.

What to do with social media accounts when there’s another brand joining?

Not related to the U.S. Airways/American Airlines merger: Sometimes, no brand goes away with a merger. All brands remain. For example, let’s say two hospitals are merging into a larger system. Those hospitals likely aren’t going away, often keep their name or part of it and the larger system brand likely won’t have as much brand equity as the hospitals on their own. In those cases, it would be unwise to close accounts of strong brands that aren’t going away. Keep them going and determine whether or not the new system brand even needs to participate on social media. Perhaps, the “legacy” accounts are all that’s needed.

Don’t create new accounts because of the mistaken belief that everyone needs their own account. Create accounts that have a purpose and support an offline brand or community.

Slightly different, yet, but this scenario also happens: A campaign joins the social media fray, but no other brands are going away.

What should be done with existing accounts in this scenario?

I always find it hard to delete or disregard existing accounts – especially when they are serving an engaged audience or community.  Now, sometimes that’s the way to go. I ran a successful news site in 2009 with Eastern Iowa News. It took me a couple of years to let the website address go and rename its Twitter account. I was invested and others were, too. At some point, it became clear, though, that Eastern Iowa News was history. But I didn’t delete the accounts until it was crystal clear. It was not a knee-jerk reaction.

When already existing brands have strong followings, don’t abandon those audiences if you aren’t really sure that the brand will go away. Perhaps, the best strategy is to have the different accounts share different content for their different – even just slightly different – target audiences. Of course, that strategy might require more staffing than what’s currently available.