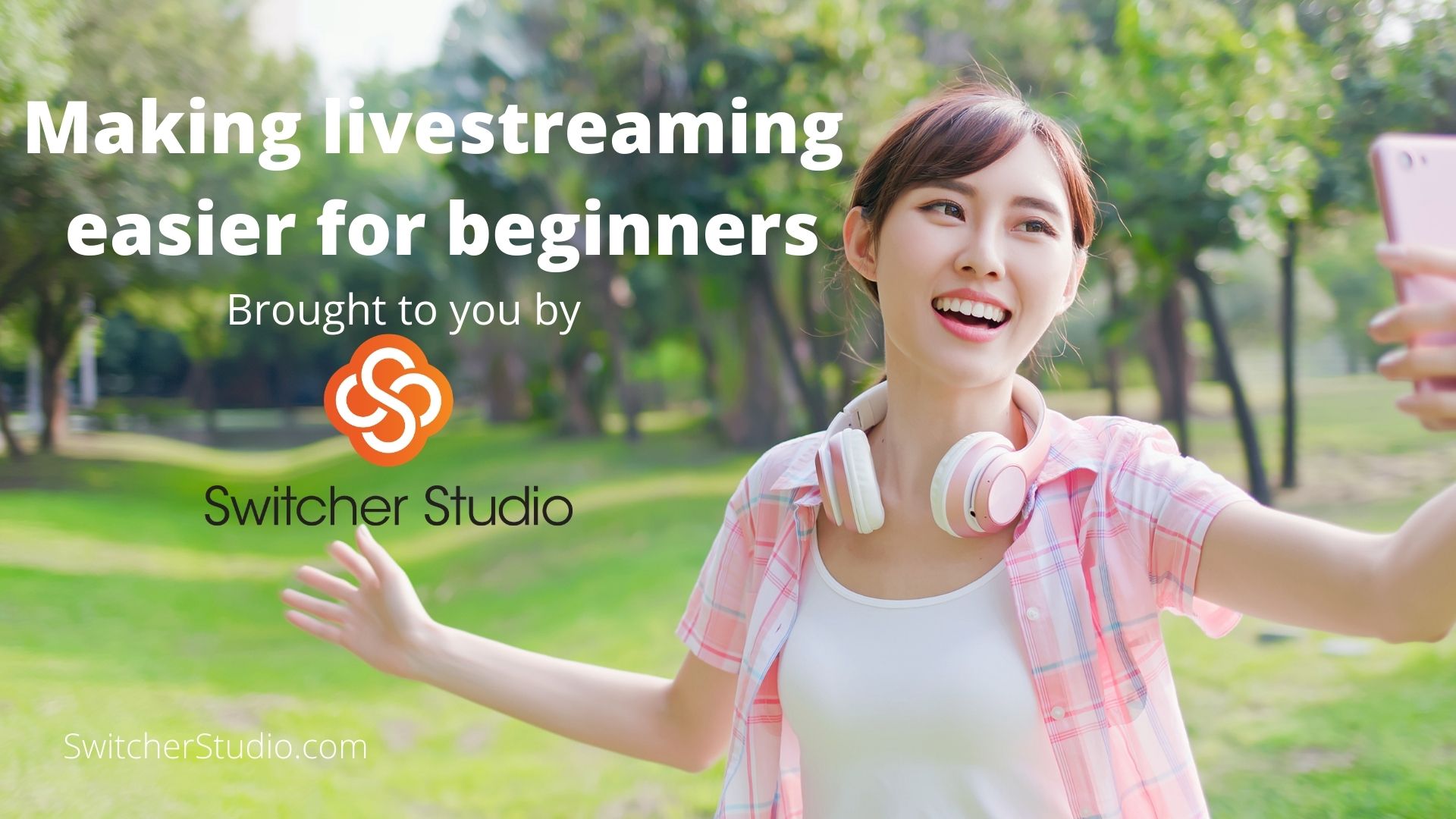 This article is sponsored by Switcher Studio. Switcher Studio allows you to produce your live video podcasts and I use it almost daily. Thanks for the support. Rest assured, these are my opinions and tips as usual.

The other day I shared how to make your livestreaming easier in this article – mostly from a company perspective. Podcasting and livestreaming as part of that strategy are a great way to engage with your audiences – whether you are doing it for your company or your personal brand. Personally, doing livestreams of my podcast has been a fantastic addition. Some livestreams get more views than the corresponding podcast episode even.

I use Switcher Studio to produce the livestream and I brand the shows as a “live recording of the Business Storytelling Podcast.”

I grew up in the print journalism world. I was writing content and didn’t really want to be on camera and definitely not on TV, but yet I have a bit of an entrepreneurial “let’s try things” spirit. The company I worked for at the time owned a newspaper and a TV station in the same market. As you might imagine, the content that I covered for the newspaper also had value to TV viewers. The bosses had the idea to ask print journalists to go on TV and share what they knew.

It was kind of nerve-wrecking the first time I did it. Don’t say anything wrong. Try to sound smart. This was about 15 years ago now and I took the approach of traditional media. I wanted to look a certain way – the way you look on TV. I dressed up. Wore a tie. Even a full suit. I tried to speak in the TV reporter cadence that was common back then.

That was kind of the expected then but you don’t have to make it this difficult to go live today. Wen you look at my livestreams I don’t remember any guest ever wearing a tie. They are usually pretty informal. We chat about the topic at hand. Sometimes we go off on a tangent. I think of it more as a social chat that is being livestream than a highly produced livestream.

That was my mindset back then. Today my mindset is different. I don’t want to look like a guy in a suit. I just want to look human and somewhat presentable, which means I shave and wear a polo or sweater in the colder months. When Carlos Hidalgo joined me on a livestream he wore a New York Yankees hat. Hey, cool. I have a Yankees hat right here. So I put that on and we both wore hats during the show.

The Yankees or sports for that matter have nothing to do with my show but it was light banter and social chit chat. “Hey, nice hat, Christoph,” Carlos greeted me when I brought him on. Will that turn off non-Yankees fans? Maybe some won’t like it, but it’s not like we are talking about the Yankees season or anything.

There’s some preparation involved and I discuss my process in this article. Know what you want to talk about, set up your camera or iPad in the way you want to be framed.

Livestreaming and marketing expert Jason Falls reminded us on a livestream with me that it’s easy to forget how much prep is actually involved in a livestream.

That’s why I recommend to start smaller. The first time I did livestreams a few years ago, I went just live on Periscope. Then Blab. I never got on the Meerkat bandwagon as they arrived on the scene and just as quickly disappeared.

And, I didn’t start with multi-camera angle shots, which you can do in Switcher. Save that for a later episode! I didn’t add graphics – which I do all the time now as well. It was just me talking. It focused my energy. Start that way and add different pieces as you move forward. Still use Switcher to start so you can get used to the platform and Switcher is needed to livestream to LinkedIn once you are approved as a livestreamer there.

Don’t go wild on promotions either. While I’ve probably done over a hundred livestreams if not hundreds, I pre-promote few. When I do promote them I use a standard graphic that I simply update:

The reason I bring this up here because I’ve seen many livestream projects where there’s all this time spend on the promotion of a stream that then didn’t happen, was lame or something else happened. For the most part, don’t make this a priority out of the gate. I barely make this a priority now.

I’m a big fan of having a loose agenda for the shows, but at the end of the day a good conversation or an authentic and informative one-person talk is better than a reading off a transcript.

If you are reading a transcript on a livestream, just email me the transcript.

Todd Cochrane, a hall of fame podcast and of Blubrry Podcasting, shared his tips on an episode of the Business Storytelling Podcast:

Todd mentioned that it’s not a good idea to transcribe too much. Just jot down an agenda, talking points and some general guidelines on what not to discuss.

On today’s episode I want to talk about:

Livestreaming: The skills and what you are comfortable with

Here are a couple of examples of how I did that.

This first one, it was just the logo and I was talking:

In this one I talked off camera and showed visuals related to what I was talking about on the screen:

You can also consider using some of the build-in on-screen graphics that Switcher provides. Here’s I added the bullet points of what I was talking about:

Be aware that you may not draw a huge audience on the first few shows. But people in your network might also tune in just because it’s the first one. I know that’s some wishy-washy guidance right there – but it’s the reality.

Remember this: My first few episodes were horrible. Terrible. I don’t know why anyone would want to watch them. We get better with time. Embrace it. Move forward and learn as you go.

“There are like 47 dominoes that have to fall,” Jason said.

The internet needs to work, then your signal is send to one server and to another and then distributed. Things can go wrong and they will.

I’ve also made silly mistakes. I forgot things I wanted to cover. I once streamed to the wrong account – just for a second but whoops. I’ve lost livestreams midstream. Another time I put up a “Starting soon” graphic by mistake while my guest was talking minutes into a show. Stuff happens. Learn as you go and get better with time.

On this livestream on AI with Katie King I lost connectivity. It happens. Once we were disconnected and realized that we were, we just started a new livestream. For the podcast version, I simply edited out the middle part where we lost the connectivity.

Livestreaming is worth adding to your content strategy from my perspective. It helps brands show their authentic selves and reach audiences on a multitude of channels.