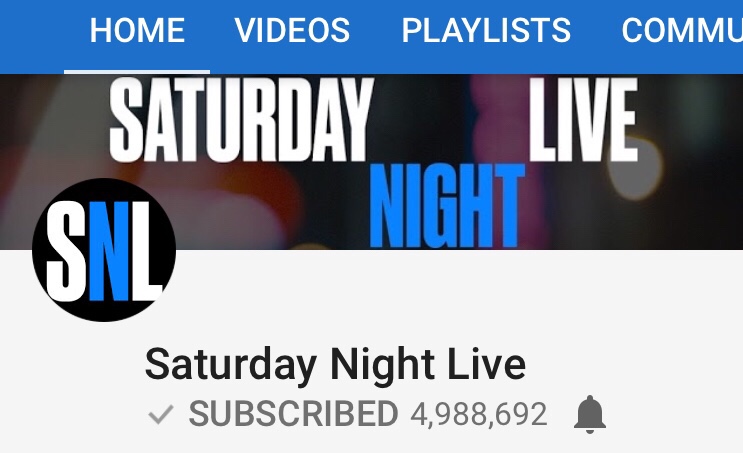 YouTube continues to be a great way to share your video content and I blogged about how the channel owns my TV viewing here. I’ve also written about how people need to stop dumping just raw footage on the network.

During the week I often watch the late-night shows in the morning after they were on the night before and on Sundays there is often a lull of new content by the time I get up around seven-ish in the morning. The exception is when there was a new Saturday Night Live episode on the night before. Of course, I have watched the show for decades on TV but it is on kind of late and if you don’t like a sketch on TV you still have to sit through it and then through commercials and then another one you might not like. You know how it goes with TV shows.

So the show publishing more than a dozen clips after every live TV show is a welcome change for me – a person that goes to bed early.

The importance of new channels for traditional publishers

The show regularly uploads clips anywhere from 2 to 8 minutes onto YouTube basically immediately after the show.

After the January 13, 2018, episode, 18 clips were loaded up online and by 8 AM Eastern time they all had a combined half a million or so views. Not bad considering we’re barely hitting breakfast time on the East Coast and it’s still dark on the West Coast.

Of course, this likely also gives audiences in Europe and other parts of the world a chance to watch. I know that I often watch YouTube versions of German shows this way.

Some of the morning and later YouTube audience might be people who actually watch part of the show but in my case I went to bed long before the show started on TV. But I happily watched most of the clips on YouTube before 8 AM central the following morning.

In other words, if they didn’t put it on YouTube they actually would lose me as an audience member because I go to bed before the show airs. So it’s really an easy way to extend their audience and share somewhat snackable pieces of content.

I’ve seen similar approaches from other networks -including late-night shows in the United States and also ESPN – the American sports network. I don’t remember ESPN posting all that many shorter pieces on YouTube on a constant basis a few months back but recently noticed more and more content from them.

That includes highlights from games and also commentary. I probably have watched more ESPN lately on YouTube than on actual TV because of this.

How to monetize a new audience

I certainly would think that any content creator can figure out a way to monetize an audience that is quickly growing on a channel. I did notice a few ads running before clips but other than that I didn’t see any additional advertisement in the SNL examples.

Of course, they could also sell ads within clips. So for example if an eight minute clip has a quick break with a commercial halfway through that’s one way to do that.

The show does a nice job optimizing the headlines and descriptions as well. Here’s an example from one of the Morning Joe clips:

The headline gives a quick overview of what we are about to watch-if we choose to watch – and they added a nice description and links to more content if you want to get more content or watch more clips.

For any content creator who already has video YouTube is a fantastic way to re-purpose that video. Just make sure to not just dump it there but to publish it in a strategic way and then also optimize it for the user experience and of course keep viewer expectations in mind.