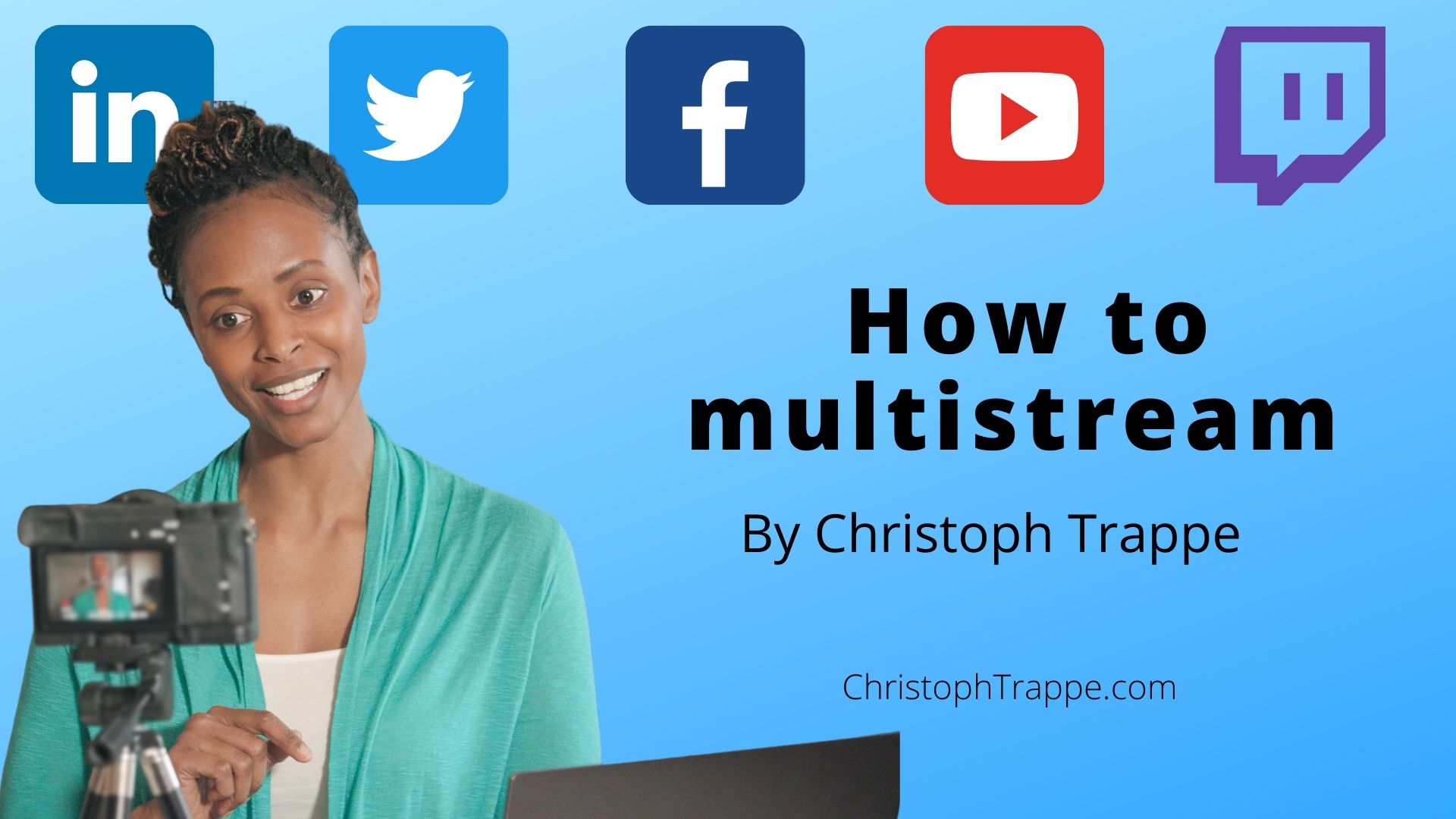 Back in the day, multistreaming meant that we would put up several devices in front of us, and each device would stream to a separate network. One to Twitter, another to Facebook, and so on. That setup could look something like this:

Today, multistreaming is much easier. That’s what I discuss in this article.

As the name would suggest, multistreaming is the practice of broadcasting your livestream to multiple networks. That could include LinkedIn, Twitter, YouTube, Facebook, and Twitch. The DB&A Television Network, where my podcast runs, also now is testing multistreamed live shows. Livestreams on TikTok and Instagram are also possible but aren’t as quickly set up due to third-party restrictions by those networks.

Technically speaking, we did multistream in that webinar a few years ago with all those devices. Today, however, multistreaming usually involves the use of a platform that handles the streaming to multiple networks for you.

What platforms to use to multistream?

There are three that are popular. (Links are affiliate links, meaning I earn credits if you click and use them.)

Restream allows you to stream to dozens of channels. There’s also a live studio where you can invite up to 10 guests for a show and add graphics, prerecorded videos, and more.

Restream is best used from your desktop browser, though there’s limited functionality available on mobile devices. Since I’m mostly streaming from my home studio nowadays, Restream works well for my ongoing recording of The Business Storytelling Show.

Restream also allows another level of multistreaming through its pairs feature. Like your guests on the show, other accounts can simulcast the broadcast to their channels. You send them the pairs link after setting up an event, and when you go live, it goes live on their channels.

I have to give Switcher Studio credit for partnering with me to start livestreaming my podcast in 2020. Switcher Studio is an iOS app that allows you to produce multi-camera shows directly from your iPad. I use it, for example, to livestream my daughters’ softball games. One iPhone camera is behind home plate, another facing the third base. Switcher allows me to cut between the angles.

In addition, you can produce podcast talk shows similar to other platforms. The most significant difference is that the iPad (or iPhone) is your production base.

Read next: Is it worth getting a cellular plan with your iPad?

In Switcher, you can also livestream to YouTube and Facebook and add other networks through RTMP. So, for example, I can add any Amazon Live code there and stream to YouTube, Facebook, and Amazon simultaneously that way.

How to decide which channels to multistream to

There’s always a decision point in content strategy, and the logical one here is to decide what channels we should multistream to. But, it’s becoming less of a “let’s think about this for hours” kind of moment.

These platforms make it extremely easy to stream to several networks at once. So, I don’t have to decide on LinkedIn, Twitter, OR any other extensive networks. Even with RTMP, I can add additional channels as long as they support this.

So instead of deciding where to stream, consider where to focus our energy. In other words, stream to all the available and relevant networks but focus your energy on one.

For example, some Amazon Livestreamers broadcast to Amazon, where their focus is. So the show is produced for that channel. On other channels, stream there, but they are secondary channels.

That’s one way to do it.

The other option is to have a show that works fine on all the channels. So, for example, on my live podcast episodes, I barely mention the channels and respond to comments on all channels like each was my leading network.

Once the multistream is complete, I still want to use the content in other channels. So I download the video file and upload it to my podcast channels – Apple, Spotify, etc. While this isn’t multistreaming technically speaking, it certainly does help us push our content to more audiences.

That’s probably the most significant advantage of multistreaming, to begin with. So you’ve spent all this time building your LinkedIn, Twitter, or whatever other networks, why not stream your livestream to all of them?