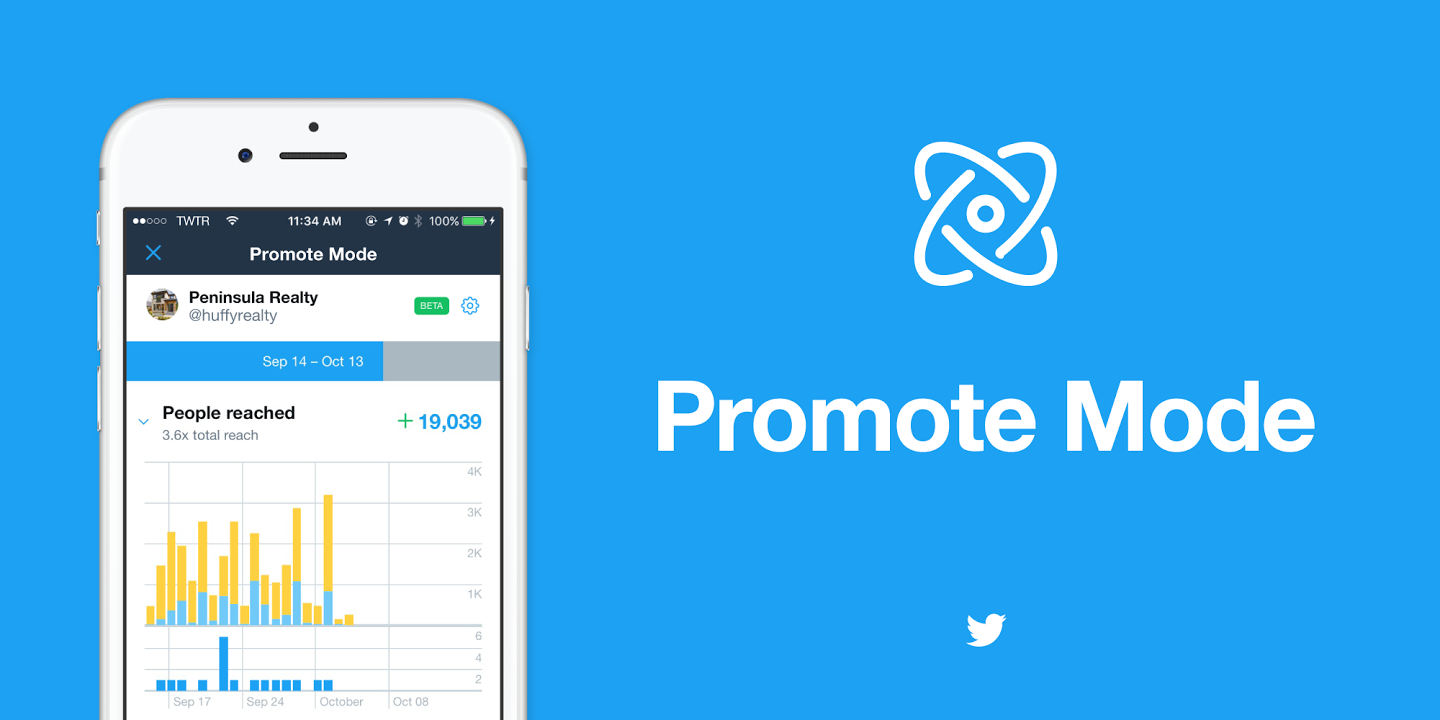 Twitter says that it is about  ”automatically amplifying your message to a larger interested audience. … your Tweets and account will automatically be promoted. Reach up to 30,000 additional people and add new followers every month.” And then the fine print : “your performance may vary.”

That prompted me to look at my own organic metrics which look like this for the last month: 

Let’s say reaching 30,000 more people would mean another 60,000 impressions, or an 11 percent increase. Would that make a difference and is that worth $99 a month? The Cost Per Thousand impressions (CPM) is pretty good and cheap. From that perspective it’s a steal.

If you are already spending money on advertising and are going for reach and brand awareness over calls to action it might be worth trying. It potentially could be a better deal than just promoting one tweet at a time – financially speaking.

Here’s an example of a tweet I recently promoted for $50, so about half of the monthly fee for Twitter Promote Mode.

I saw 19,000 paid impressions. I can’t tell how many people that is, but if my prediction above is closeish the automatic promotions could be a better deal.

I looked at how Twitter Promote Mode works. Once you sign up, you can pick from a number of categories and can choose up to five. The current areas listed are:

Targeting then happens in the country that you selected.

From there it appears to be automated. I don’t know how it prioritizes promotions. For example, what if I don’t want a post with a link to another site to be promoted. I shared it because it was an interesting article but I don’t necessarily want to highlight it beyond organic sharing.

Maybe promotions are spread across all posts? That’s not much per post with hundreds of tweets a month.

As is often the case, the answer is that it depends. Probably not if you are a highly local business in a niche category that is not listed in the areas that can be targeted.

But if you are national and fit into one of the areas listed, it may very well be worth trying. Let’s say you are a pet content site or sell things to pet owners of a variety of types, targeting as follows might work:

What I don’t necessarily like is that it doesn’t allow you to tell it what your goal is. Facebook ads ask for that information and it can include:

The call to action buttons can be updated based on your specific goal and offering, too. I would recommend having a specific goal for any campaign.

If your niche isn’t listed in the areas offered for targeting it’s probably not worth it. In my case, I can’t see my promotions to run in any of those areas.

Books and literature? Even though I’m currently promoting my new book that topic seems to cover a lot more than public relations books.

Sports? That could include a lot of things:

Just those two areas have plenty of sub categories.

Certainly, paid promotion is a strategy that brands most likely will have to implement in 2020 to further their reach and push results.

Social media reach has been declining, now organic traffic has been dropping for many and certainly content performance projects have never been harder.

One way to stay ahead of the game certainly is to try paid campaigns that drive results. Is this one of them? You’ll have to see if the targeting works for you and then try it for a month or two to see if there’s at least a hint of success toward your goals.

Do keep in mind that we are seeing an increase in paid posts in Twitter timelines. Let’s dive into how paid content currently looks on Twitter and other channels. That’s in addition to the sponsored campaigns that don’t involve paying the social media network.

An influencer posts something on social media after somebody paid them for it. That is indeed a strategy and sometimes it works in our favor. For example, I ran this sponsored video campaign without spending a dime on social advertising. LinkedIn performed the best. It was a bit of luck. I had no idea which network would be the best and would have never guessed that LinkedIn was going to perform that well.

To this point, I’ve added the following to sponsored links – even when I believe they are highly valuable: SPONSORED: <headline that links>. Or a version of it.

This post was supported by Lead Forensics. Thank you. Rest assured, the content is my own professional opinion and advice as always.

Of course, social media networks are in it to make money as well! That’s why they charge you more and more for content distribution.

I haven’t seen organic reach on any social network increase in a while. Show them the money, unfortunately. – @ctrappe

In late 2019 and early 2020, Twitter definitely stepped up the volume of promoted tweets. I see them all over the place now:

Let’s look at how promoted tweets look in my timeline. Here’s one example. I scroll and then see this:

There’s no mention of that it’s a promoted tweet until you scroll way down and see a light promoted at the end of the tweet. Here’s another example.

Facebook – love it or hate it – takes a different approach. Sponsored content – which is just a different term for promoted – gets acknowledged at the top.

I find the Facebook way much more transparent than what Twitter is doing. I can see right away that it’s an ad. I can draw my conclusions from there. If it’s good content and I care, I won’t hold it against the post that it’s an ad.

What’s the best way to disclose paid content then?

The Federal Trade Commission in the United States says that influencers and brands must clearly disclose relationships. Certainly, disclosing the paid relationship at the top is much more clearer than at the bottom. Sure, I can scroll down to see it, but I may not. In fact, I’ve tried to unfollow a lot of those accounts on Twitter, which is not possible, since I don’t follow them to begin with. They are showing up in my feed because they paid to be there.

When Adobe paid my way to cover the Adobe Summit for them I put this disclaimer on the top of all articles:

Disclaimer: Adobe invited me to the Adobe Summit North America 2017. This post was not approved by them. They didn’t even get a preview. It’s my opinion and if you agree it’s yours too. ??

Disclaiming paid content at the bottom or in a very subtle way has been the norm. And maybe readers will dismiss content when they see “sponsored.” I know I do sometimes. But not all the time. Looking at sponsored content clicks on Facebook, too, it’s the typical numbers game.

What does that mean when somebody puts “sponsored” in a social media post?

Because the content is shown to more people, more people see it – even if they don’t pay attention to it. And in turn, often the case is that more people will click.

I think in general, it’s a good practice to have the disclaimer at the top. And depending on the type of content, it may not hurt redership at all. Let’s take The Points Guy, one of my favorite travel sites, as an example.

Every article has the disclaimer front and center on the top:

This post contains references to products from one or more of our advertisers. We may receive compensation when you click on links to those products. Terms apply to the offers listed on this page. For an explanation of our Advertising Policy, visit this page.

Every article has it, even the ones that don’t link to any products. I kind of skim over it honestly at this point. But TPG has also proven to me that they have good content around points travel and travel in general. I’m such a fan, I give them public shout-outs for my own points travel:

On Twitter, the promoted tag has been at the bottom of tweets for as long as I can remember, but the topic came top of mind with the increased volume of those paid tweets. As a consumer, I would appreciate if Twitter follows Facebook’s lead and puts it at the top of posts.


Listen to my podcast