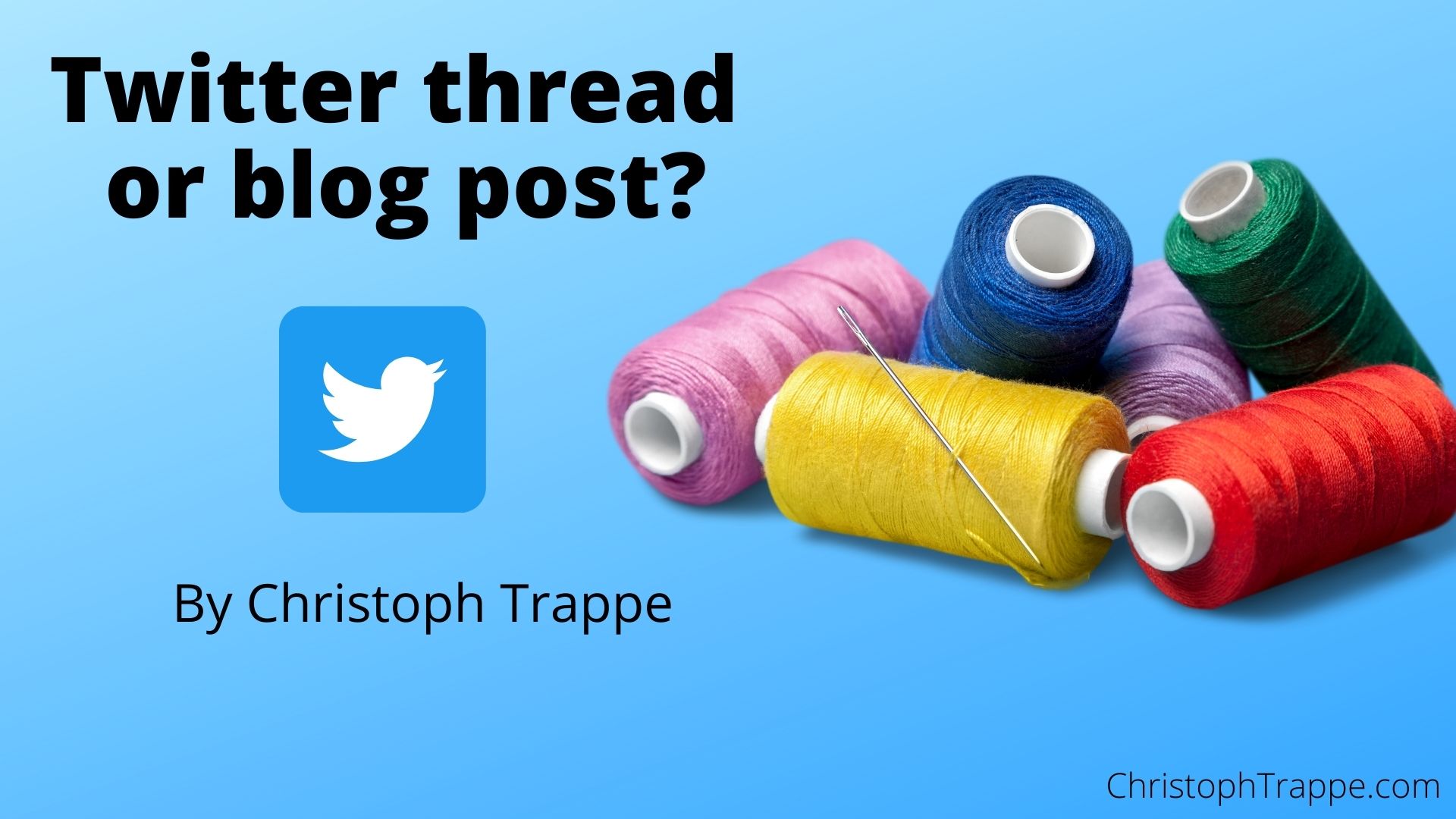 Twitter threads are a great way to share stories that need to be longer than a single tweet of 280 characters. You can write the tweets in the thread all at once and then push publish and Twitters users can read them in sequence. Some Twitter threads have gotten quite long, which begs the question: When should a Twitter thread be a blog post and how do we use Twitter threads at all?

Some people use Twitter threads to share an ongoing story. Every tweet has to be good enough to want you to read the next one. That can be a great strategy – especially if Twitter is your main channel to connect with audiences. But Pedro makes a good point about using Twitter threads content as a blog post or even vice versa.

As part of Create Once, Publish Everywhere I would probably lean toward using the content in a blog post and a thread.

Read next: What goes into building a historical database website?

The beauty in this functionality is that you can keep things that are related together and the people that actually want to read more can do that and click along. It potentially gives related tweets a longer shelf life as the story is connected and not just a bunch of disconnected tweets that could show up out of order.

A Twitter thread is a number of tweets that continue a story. Here’s how that can look:

How I repurposed a podcast transcript as a Twitter thread

I recorded a podcast about targeted marketing with Davia Lassiter – a higher education marketing director. The podcast was published on the Stamats website and distributed to the main podcast channels.

Then further down, we published the transcript:

Podcast transcripts are useful when you can’t listen #contentmarketing

The transcript can help with:

I then used pieces from the transcript in a Twitter thread. You can follow this same model for your blog posts.

How did individual tweets perform? From the top down:

And No. 3 went up actually:

The last tweet was the second best performing interestingly:

Hundreds of views isn’t bad and many of those tweets could stand alone. Keep in mind that due to Twitter’s algorithm, people may see the last tweet first or one in the middle. You are tweeting:

But that doesn’t mean people will see it in that order. They may appear in this order:

The algorithm tries to serve what it thinks is most relevant.

Either way, no matter what tweet shows first, the reader can always click on read full thread to see the full thread. I do that more and more as more and more people are using threads to share longer stories. Blogs still matter and can help with your SEO, which is why in part we did the transcript above.

You can also use Twitter threads for ongoing stories. Just keep adding tweets to them. Here’s an example from when I was traveling and things were getting interesting.

The first tweet in the thread had about 3,200 impressions in a few hours – so way more than my other example. From there the numbers went down, which is expected as you lose readers with every click or action that’s required.

Here’s how it looks on mobile:

After you’ve added a number of tweets you can click on tweet all in the top right to push them all out at once.

I’m a fan of scheduling articles and social posts, but can you do that with Twitter threads?

As of me updating this article in December 2021, you cannot schedule Twitter threads in Twitter. The schedule function is grayed out.

Twitter threads is a nice way to keep stories together on Twitter. I think it’s worth trying – especially if that’s where your brand communicates with people the most. But also repurpose the content elsewhere like in a: